Packers learn how “not” to tackle Big Ben

Packers learn how “not” to tackle Big Ben

“It’s just a mental or a subliminal note that when you get your opportunity to get him, you got to hit, you got to wrap up and bring all your technique and all your weight with you, because he’s definitely a big guy to bring down.” — Packers linebacker Desmond Bishop.

From an AP article that appeared on Yahoo Sports this afternoon: 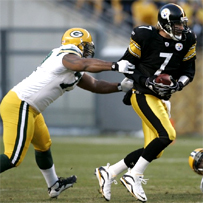 Linebacker Desmond Bishop says the Packers began preparing for Ben Roethlisberger by watching video of how not to bring down the Steelers’ big quarterback.

“I’m sure it could have lasted longer,” Bishop said of the video. “A lot of guys are going for his pump fakes or not wrapping up fully when they have him.

Green Bay sacked Roethlisberger five times, but missed several other opportunities as Big Ben threw for a career-best 503 yards and three touchdowns in a wild 37-36 victory.

“We had five sacks, but, man, we could have had him down 10 times. He’s tough to tackle,” defensive end Ryan Pickett said. “He’s a good quarterback. And he breaks more tackles than any running back I’ve seen.”

The timely video review was meant to remind the Packers that there are no easy ways to bring a 6-foot-5, 241-pound person to the ground.

Players and coaches say there is a technique for tackling the Steelers quarterback—hit him between his chest and knees, then wrap up and hold on until he goes down or the whistle blows.

Bet on the whistle.

CBS Sports senior writer Clark Judge looks back on the play of the  Steelers backup quarterbacks this season: 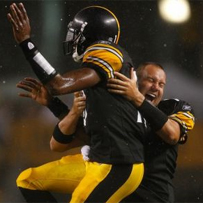 Dennis Dixon and Charlie Batch won’t draw much of an audience this week, but maybe they should.

They were the two guys who stood in for Roethlisberger while he served a four-game suspension imposed by the NFL, and they were the two who did just enough that the Steelers won three of their first four starts when most realists had them pegged no better than 2-2.

Batch and Dixon combined to complete 63 percent of their passes for 606 yards, three touchdowns, four interceptions and a passer rating of 77.49. Granted, those numbers aren’t exceptional, but this is: 3-1. They beat Atlanta. They beat Tennessee. They beat Tampa Bay. The three were a combined 29-19, and nobody in the NFC was better than the Falcons.

All three victories featured stubborn Pittsburgh defense — with the Steelers allowing no more than 13 points in any game — and no major gaffes by the quarterbacks.

Credit Batch. Credit Dixon. Credit Tomlin. Credit offensive coordinator Bruce Arians, I don’t care. The Steelers did what they had to do, which was to make the best of a bad situation and win more games than they lost without Roethlisberger.

Once he returned to the huddle, the Steelers returned to normal — winning 11 of their next 14 and reaching their third Super Bowl in six years. That is no coincidence. Pittsburgh wouldn’t be in Super Bowl XLV without Roethlisberger, but I argue they wouldn’t be there without Batch and Dixon, either.

Thank you to all those that have sent emails wishing the best to Ben and the Steelers as they prepare to play in Super Bowl XLV in Dallas.

For those that haven’t sent an email but would still like to, I will accept them through Monday and post them later in the week! You can send them here (bigben7website@gmail.com).