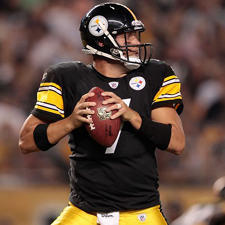 When looking at the four talented quarterbacks who played in the first two games of the 2011 NFL preseason’s second week, it was easy to see which two have multiple Super Bowl rings.

It was a tale of two different halves for the Pennsylvania-based No. 7s when their teams met in Pittsburgh. Although Roethlisberger should be a bit concerned his two left tackles — Jonathan Scott and rookie replacement Marcus Gilbert — injured their knees, he was sharp, delivering pretty TD passes to both rising star Antonio Brown and old reliable Hines Ward. With his ability to extend pass plays with his strength and mobility, Big Ben rendered a much-hyped Eagles secondary listless.

From Jonathan Tamari, The Philadelphia Inquirer:

On a drive that included nine runs and five passes, the Eagles defensive ends were flying around the edges but often overrunning Steelers quarterback Ben Roethlisberger, who was able to step up in the pocket. Roethlisberger was 5 for 8 passing on the drive for 70 yards and was helped when Cullen Jenkins grabbed his facemask on a third-down sack.

With the Eagles setting up their defensive linemen wide, Roethlisberger also took advantage of wide open space in the middle of the field, running one time up the gut for 8 yards. Only linebacker Jamar Chaney was in the area, and he was taken out by the center.

On the final play, Roethlisberger used hesitation to freeze Samuel, allowing Antonio Brown to run free for a 29-yard touchdown to cap a drive of 7 minutes, 36 seconds. The Steelers’ second drive went 96 yards in 8:15 and also ended in a touchdown.

For the Fantasy Football fans…

Ben Roethlisberger completed 8-of-12 passes for 125 yards and two touchdowns against the Eagles in the Steelers’ second preseason game.

The Steelers’ first-team offense dominated time of possession through a quarter and a half, imposing their will on the Eagles’ star-studded defense. A spry-looking Roethlisberger impressively escaped pressure, hitting a wide open Antonio Brown for a 29-yard score and Hines Ward for a 20-yard touchdown. He left with a 140.6 passer rating. Even with offensive line concerns, Big Ben is a top-10 fantasy QB.

You can see video highlights of the game here.

You can see photos from the game here.