“We found ways to make plays, and guys found ways to get open. I found a way to get them the ball.” — Ben on Thursday’s Pre-Season Game performance. 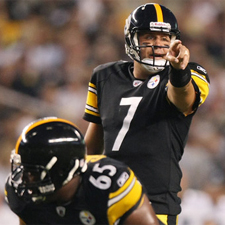 Take a bow Ben Roethlisberger. Now take a seat. The Steelers quarterback played just two series Thursday night in the team’s 24-14 preseason victory over the Philadelphia Eagles at Heinz Field, but those two series were enough to have him ready for the regular season.

The drives were masterful, with the Steelers converting all seven third-down opportunities – although one came with the help of a big facemask penalty. And Roethlisberger connected with seven different receivers.

The performance was extra encouraging because it came against the Eagles’ first-team defense, which boasts its dream team of cornerbacks in Samuel, Nnamdi Asomugha and Dominique Rodgers-Cromartie.

Roethlisberger looked like a quarterback who has something to prove after losing the Super Bowl in February.


You can also read a complete recap from the Examiner‘s Christina Rivers here.

Ben was named “Steelers Digest Player of the Week” for his performance in last night’s game against the Philadelphia Eagles.

You’ll enjoy the “Game Day Exclusive” video posted at Steelers.com – plenty of highlights and a lot of sideline moments.