Home/News/Preview: Seahawks vs Steelers
Previous Next

He’s a big, physical dude and he has a formula for success and it’ s proven year in and year out. He moves the ship. If we affect him, we affect the team because he’s the engine.” — Seahawks LB David Hawthorne on Ben.

“He’s an amazing player in general. But when he really goes off the charts is when the play rhythm changes and he moves out of the pocket, or he moves in the pocket and throws somebody on the ground and finds an open receiver and makes an incredible throw. He’s incredible at finding guys down field with all the chaos going on around him. He’s more dangerous when he gets on the loose.” — Seahawks head coach Pete Carroll on preparing for Ben.

From Danny O’Neil, The Seattle Times: 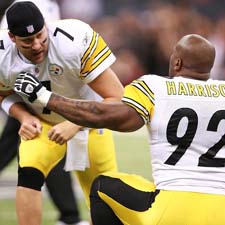 Welcome to Blitzburgh, a town where the linebackers eat meat, floss with opposing quarterbacks and the crowd’s devotion to its defense unites generations.

“They love their team with a deep connection,” Seattle coach Pete Carroll said. “They show it when they play.”

Carroll’s Seahawks will feel that Sunday when one of the league’s youngest teams continues to search for its new identity against the Steelers, an experienced heavyweight that will be looking to work out some of last week’s frustrations.

“It’s a great opportunity for us,” Carroll said. “It’s going to be as difficult as it can get.”

So has Pittsburgh gotten old?

“You hear that every year,” said linebacker James Harrison, one of Pittsburgh’s holdovers from Super Bowl XL. “It’s not like they say, ‘You know, that defense, their age is just right to succeed.’ It’s either you’re too young or you’re too old.

“So I don’t really pay any attention to it.”

One thing Roethlisberger promised to change against the Seattle Seahawks is the use of the no-huddle offense. The Steelers did not show it in Baltimore; they will Sunday in Heinz Field, he vowed.

“Yeah, I’ll make sure of that. We need to. We didn’t do it at all the last game. We kind of throw a lot of things out the window when you’re getting killed like that. I know people are probably making a big deal that we didn’t run the ball enough. I think we’ll see [the no-huddle] this week.” 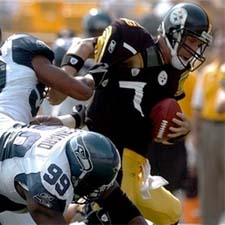 When facing Ben Roethlisberger, pressuring the quarterback is only half the battle.

Actually getting the dude on the ground is a different story.

But that’s a tall task against a quarterback like Roethlisberger, who scrambles well and prefers to throw the ball deep when he leaves the pocket.

“He’s really tough. He has a good pocket presence,” Brock said. “He’ll get out of the pocket and when he sees something open up, he’ll run for like 20 yards. He’s a good vet. He’s a great quarterback. So we have to be on our toes and try to get after him as much as possible.”

Marcus Gilbert, whose father used to work as a Secret Service agent, will be put to the test today when he starts at right tackle for the Steelers.

he Steelers didn’t plan on playing Gilbert much this season. But with Willie Colon recovering on the injured reserve list with a torn triceps, the rookie moves up on the depth chart.

“Ben said to me, ‘You aren’t a rookie. You’re a starter for the Pittsburgh Steelers. The standard is the standard,'” Gilbert said.

“I’m excited about the opportunity. I’m ready to go.”


*Both quotes at the top are from the “Steelers Preview” video at Seahawks.com