Ben overcame a hit to the knee throwing for 298 yards and 1 touchdown finishing with a passer rating of 115.7 in his 70th career win.


“I’m still not sure how Ben Roethlisberger’s right knee didn’t come apart after that penalized low hit by Seattle defensive end Raheem Brock. At first glance, did anyone think Big Ben wasn’t gone for the year, let alone that he’d stay in and play the rest of the game? The word ‘tough” gets over-used in football, but not this time.” — SI.com’s Don Banks, from his Snap Judgments column. 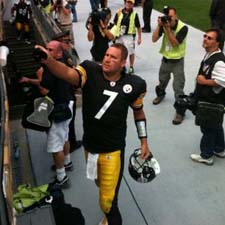 On the first series of the game –

“Just taking what they gave us. I think I hit more check-downs today than I have in a long time. It just proves that our guys can get it done even when you get them the ball short; you don’t have to go deep every time.”

“B.A. was calling the next play and I was waving everyone off. We went to it and it didn’t seem like anyone blinked.”


On the injury to his knee –

“It was scary. Knees are nothing to play around with. Structurally, it felt fine. But the good thing was I didn’t feel anything pop, and the doctors examined it and moved the knee around and everything was stable. Then it was just a matter of playing through the pain.”

“We made improvements, but there’s still a long way to go for us.”


On his thoughts overall of today’s win –

“I felt like we could have scored a lot more points than we did, but we won the game and that’s what’s most important right now.”


You can watch highlights of today’s game here.

With this win – Ben improves to 70-30, which is eighth among active quarterbacks for wins. He is also the fourth fastest to 70 wins among Super Bowl era quarterbacks.


*Thank you to KDKA‘s Jory Rand!