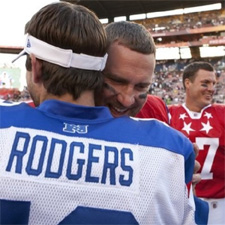 Marshall had six catches for 177 yards — the second-most in Pro Bowl history, earning MVP honors for the effort.

Ben completed 6-of-11 passes for 181 yards and two touchdowns, including a 74-yarder to Dolphins wide receiver Brandon Marshall. Philip Rivers also had a pair of touchdown passes.

Aaron Rodgers and Drew Brees both threw two touchdowns for the NFC.

“It says a lot when you’re playing with those guys (Roethlisberger, Rivers & Dalton) playing quarterback. They put it up and I made the play. So hats off to those guys.” — Brandon Marshall, Pro Bowl MVP, during post-game comments.

Photos from the game here and here.