I am writing on behalf of my students at Propel Braddock Hills High School. 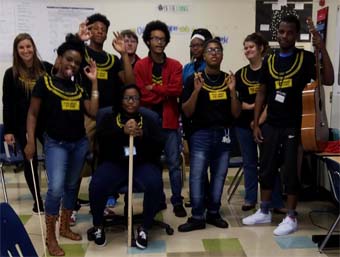 Every day I get the privilege of working with a group of thirteen 11th graders for about 40 minutes in a forum called ‘CREW’.

We discuss and participate in activities that a normal school day usually wouldn’t permit. We spend time doing team building activities, watching the news, discussing ethical dilemmas, building trust and character, talking about our plans for the future, etc.

During Week 3, when the Steelers lost against the Eagles, I was watching the post-game press conferences at my home. When confronted about particular players “dropping the ball” so to speak, Big Ben refused to allow the reporters to take that direction and call out each players mistakes. Instead, he said something very profound – “We all need to do some thumb-pointing.” He continued to say that it was an offensive, defensive and special teams loss and “We all need to thumb-point”. While simple, it’s really profound. My students and I spent that week discussing, journaling and analyzing areas in our lives where we need to “point the thumb”.

Working in a low-income school with minority students, it is really inspiring to see such an admired athlete in this city be such a mature and positive influence. I feel proud to represent a football team and a city that has spokesmen like Ben. In today’s day and age of pop-culture and politics, I’m sometimes at a loss for role models in the media that I can point our kids to. I was so inspired by Ben and his approach on being solutions-oriented, self-reflective and collaboration, my students and I spent an entire week reflecting on how we can be more like Ben.

I thought he deserved to know that he has inspired the hearts of my students.— Tiffany Yackuboskey, Teacher, Propel Braddock High School.


*Thank you so much to Ms. Yackuboskey and her class for sharing this email with us!