QB’s sophomore season can be the toughest

QB’s sophomore season can be the toughest

“The first time around, you kind of surprise teams, they don’t know what to expect. The second time around, teams prepare for you, they’re ready for you. It’s always a little tougher because they can prepare for you and your tendencies.” — Ben, from his interview for the story below.

“Against Steelers, Bengals counting on Dalton to exorcise sophomore jinx” 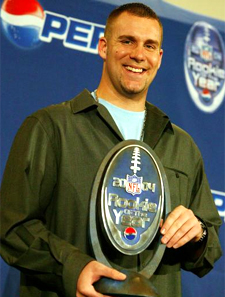 It wasn’t easy for Ben Roethlisberger to upstage his rookie season in the National Football League, not when he completed a club-record 66.4 percent of his passes, became the first quarterback in league history to be 13-0 as a starter and led the Steelers to the AFC Championship game.

But, at 23, Roethlisberger did just that, taking control of the offense in the postseason, leading the Steelers to three road playoff wins and becoming the youngest quarterback to win the Super Bowl.

Roethlisberger might be in the minority, but he believes it’s tougher for a quarterback to succeed in his second season — even though, for him, the ultimate prize was bigger the second time around.

Still, he thought it was more daunting, more difficult to achieve the numbers and victories he accomplished as a rookie.

“People want to jump on guys so fast as rookies, but I always say let’s wait till they do it for two or three years and see where they are after that,” said Roethlisberger, who has won two Super Bowls and been to a third in nine seasons with the Steelers…