“I’m proud of those guys. Always the thing we say is, ‘Next man up.’ I’m proud of the way those young guys stepped up. There never was a doubt they would do that.” — Ben, during his interview on the field. 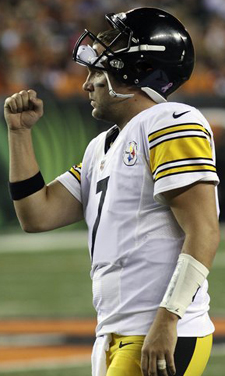 The top two running backs were gone. So were two offensive linemen. All that the Steelers had left was Ben Roethlisberger, some backup runners and one of the NFL’s top defenses.

Roethlisberger threw for a touchdown, overcoming his end zone interception and costly fumble, and Pittsburgh’s defense clamped down on the Bengals’ Dalton-to-Green connection for a 24-17 victory Sunday night.

The Steelers improved to 12-2 at Paul Brown Stadium, where thousands of towel-waving fans make them feel at home. They have won their last five overall against their AFC North rival and 10 of the last 12.

“We put ourselves in too many holes. I take a lot of that on myself. We had to win one game. We had each other’s backs all day.” — Ben, during his post-game interview.

The Steelers’ 31st-ranked running game was missing Rashard Mendenhall and Isaac Redman, as well as center Maurkice Pouncey and right tackle Marcus Gilbert. Plus, safety Troy Polamalu was inactive for the fourth time in the last five games with a calf injury.

That put a lot on Roethlisberger, who usually does well in his home state – 15-2 all-time in Cleveland and Cincinnati – but has rarely been so short-handed.


You can read more from Mr. Kay here.

You can watch highlights of the game here. And you can see a few photos here.

Ben completed 27 of 37 passes for 278 yards, one touchdown and one interception.

To Heath Miller, Steelers Digest Player of the Week!

“It feels good, but I’m more disappointed because I feel like we had two chances before that last one to close it out. We went out there and said, ‘offensively, let’s not put it on our defense, let’s close this thing out’. But I missed a throw to Antonio unfortunately, then got caught between throws and got upset with myself over that one. But I’m happy the defense got them off the field and then we were able to milk the clock.” — Ben, on how he felt about being able to “seal the game at the end“.