Home/News/Remember the reason
Previous Next

…for the holiday weekend!

The Wreaths Across America organization does!

Memorial Day may herald in the start of summer vacations for many, but donations are already being accepted for the 2015 Wreaths Across America Remembrance Ceremony, which is scheduled for Saturday, December 12th, 2015.

“Our mission: Remember, Honor, Teach, is carried out in part by coordinating wreath laying ceremonies a specified Saturday in December at Arlington, as well as veterans’ cemeteries and other locations in all 50 states and beyond. We also organize a week of events including international veteran’s tributes, ceremonies at State Houses and a week-long “Veteran’s Parade” between Maine and Virginia where we stop along the way to spread our message about the importance of remembering our fallen heroes, honoring those who serve, and teaching our children about the sacrifices made by veterans and their families to preserve our freedoms.

“This week of events is made possible by thousands of volunteers who organize local ceremonies, raise funds to sponsor wreaths, and participate in the events. We receive no government funding. The cost of our programs is paid by individual wreaths sponsors, corporate donors and volunteer truckers.”

If you would like to sponsor wreaths to be placed on the graves of our military this December, now is the time!

Please answer the call once again to Honor our Fallen!


To donate & to learn how you can take part in this wonderful organization, click here.


Special to BigBen7.com from Renee Worcester, Wreaths Across America Board Member: 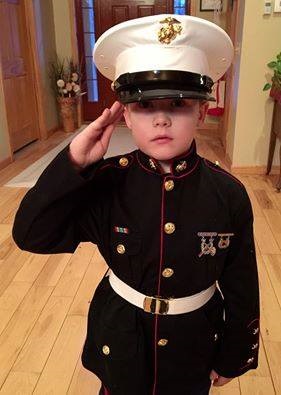 Miles has been involved in Wreaths Across America since birth. Being the grandson of WAA founder Morrill Worcester, Miles has been brought up to honor and respect the military and their families. Miles uncle is a Major in the Marines and Miles has always had a special place in his heart for the Marine Corp.

Always outfitted in the latest cammies, jumpsuits and Marine garb, Miles wants to be a Marine when he gets older.

Miles turned six on January 15th, 2015 and when asked what he wanted for his birthday, his response was simply, “Nothing. I don’t need anything!”. I asked him if he would like to ask his friends to bring different items for a care package that we could send to troops oversees. His response was, “Yesss!!!”.

After a search, we came across the 133rd Medical Unit stationed in Bagram, Afghanistan.

Miles had a military-themed birthday party and his friends brought more than fifty pounds of food, toiletries, magazines, pens, and envelopes to send to Afghanistan. He was given the name and address of 1st Lieutenant Jonathan Campbell, or as we came to call him, “Doc”, and sent him a letter, explaining what he did along with pictures from his party. After a month or so with no response, I received a text with a newsletter attached. Reading it aloud to my husband, I looked at him to gauge his reaction as my voice quivered with pride for what my six-year old had just received!

I knew that all of our family outings to parades, speaking engagements and awards ceremonies had been worth it! I had a little boy who selflessly gave up birthday presents so he could make a difference in a person’s life that he had never met. A person who put their life on the line every day in order to keep him safe!

What an honor for him! 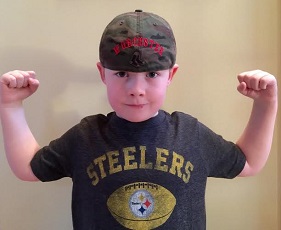 Also included in the package were four letters of thanks from the medics of the 133rd. Medics who have seen so many heros come through calling my son a “hero”. This is the cornerstone of a huge, memorable moment in my son’s young life. In the letter from Doc, he told my son that this flag means so many things: things that he is too young to understand right now and will learn later in life. But something he did want Miles to know and remember was:

1. The American flag is a symbol of our freedom and should always be respected and treated carefully. When folded in a triangle you put it on a shelf or in another special area where it’s nice and safe.

2. Look at this flag every day, and when you do, think about your family and friends and how much you love them.

This is something Miles will remember and live every day.

Miles will continue the Wreaths Across America mission, and God willing, continue to Remember, Honor & Teach the next generation of leaders.


*Thank you so much for sharing this with us Renee, and thank you Miles for what you did! You are a HERO! 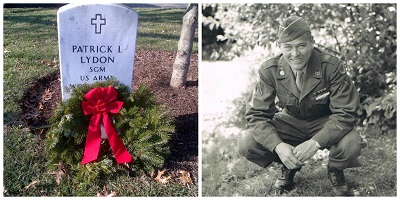 Thank you so much to the Wreaths Across America organization and the unknown volunteers who place a wreath on my father’s grave at Arlington National Cemetery every December!

He was a rifleman in the 422nd Infantry, 106th Division of the First Army. He was captured by the Germans during the Battle of the Bulge and was a POW until he was liberated during the Allied Victory in May of 1945. He was awarded a Bronze Star and two Purple Hearts.

Seeing that wreath adorning his grave brings both smiles and tears to our faces when we visit during the holiday season. — Erin

And it wouldn’t be Memorial Day Weekend without the return of this special video that not only pays tribute to our military, but also our police & fire heroes:

“All gave some, some gave all…”


If you are unable to view the video above, you can view it here.