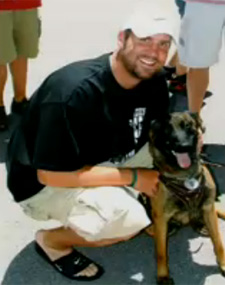 Bullet-proof vests and a bomb-sniffing dog will be coming to Westmoreland County this year with the help of a Pittsburgh Steelers quarterback.

The Ben Roethlisberger Foundation’s Giving Back Fund has awarded $4,000 to the Greenburg Volunteer Fire Department and $5,000 to Westmoreland County Park Police, officials from both groups confirmed on Wednesday.

Greensburg will use the money to buy ballistic vests for handlers of its bloodhound team, Capt. Lou Battistella said.

The money will help with costs related to the park police department having its first explosive-sniffing dog, Chief Nick Caesar said.

“I want to thank Big Ben for his generosity, and we sincerely appreciate his interest in his community,” Battistella said.

“We’re very, very excited about it,” Caesar said. “It’s going to be the first (dog) in the county (department) and the receiving of this grant … is going to help us get started.”


You can read more from the magazine’s website here.

Johnstown Police Department has received a $5,000 grant to support its K-9 corps.

The money comes from the Ben Roethlisberger Foundation, a charitable organization founded by the Pittsburgh Steelers quarterback.

City police Chief Craig Foust said the money is available for training or equipment but is expected to go into a fund for eventual replacement of aging police dogs.

“At least three of our dogs are approaching retirement age over the next couple years,” Foust said.

You can read about other grants below (February 21st news).

*The photo above was taken from a video tribute to Ben and his Foundation. Ben poses with “Spike”, the K-9 that he purchased for the Findlay, Ohio police department after their other K-9 “Flip” was killed in 2006. The video is the work of Dan Harmon, Doug Marshall, and Brad and Bryon Deeter.

That Ben’s foundation has been donating K-9 and search and rescue dogs to police and fire departments across the country since 2006?

Every city in which Ben plays football is eligible, so regardless of what team wins, the community where they play always comes out a winner.

The idea for the foundation came from Ben’s father, Ken. In 2006, a K-9 police dog in Findlay named Flip, was shot and killed.

“I’ve always been a dog person,” Ben said. “So it just made sense to do this. A couple of months later, my dad asked, ‘Wouldn’t it be nice to buy a dog for every city that you play in?'”

Garrett Cagle is quite sure he is Big Ben’s Biggest Fan! 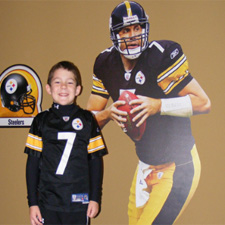 For Garrett’s Steelers-themed birthday party last year, he had his guests bring cans of food in lieu of birthday gifts. He collected 100 cans of food for the pantry at his church to give to the needy because he said, “Ben would want us to do something good for other people.”

This year Garrett’s mom sent in photos of his “Big Ben room”!

According to mom Tammy, “He also has a very unique love and understanding for the game of football. He has played football since he was 4 years old for our towns Jr-Pro Pee Wee football team. There are very few 4 year olds that make it through football at this age. This past year was his 4th year to play. He got the HONOR of being the quarterback for his team this past year.”

“I am so proud that Garrett has decided to have Ben and the Steelers team as his role models,” continued his mom. “He is reminded of just how much he loves them when he goes in his room everyday. He has helped us decorate his room in nothing but Steeler/Big Ben items.”


You can check out Garrett’s Big Ben room here.

“Little Big Ben” Ahaus has already outgrown the jersey of his favorite player and namesake twice, and his sister Caroline is all smiles when she’s wearing her #7 jersey.

And lil’ fan Jax Galati takes Big Ben with him wherever he goes…even when it’s time for a nap!


You can check out all the Lil’ Fans here. We even have a few Lil’ Teammates here.