Ben weighs in on the NFL Draft, new teammates and more…

Quarterback Ben Roethlisberger has been taking part in the team’s offseason workouts, getting to know some of the players the team signed via free agency this offseason and working on building a rapport with them.

Roethlisberger took time out after a recent workout to talk about the recent NFL Draft, the new free agents, and the changes to the team’s roster. 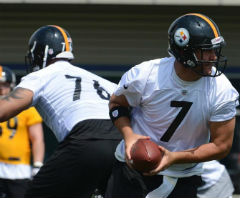 Did you keep an eye on the recent NFL Draft, seeing what the Steelers picked?


It’s early to know what they can do, but are you happy you got a few weapons with a tall receiver in Martavis Bryant and a speedster in Dri Archer?

It’s always exciting. The draft is great because on paper everybody looks good. We have to get out there and get pads on in camp and see what happens when people get hit. Offensively speaking we needed to address a tall receiver and we got one.


This offseason we signed some free agent receivers, Lance Moore and Darrius Heyward-Bey. Are you starting to build that rapport with those guys?

You have to. As often as I can I am here throwing and they are here every day catching and just trying to learn. It’s not a fast process. We have to learn how they like to come out of breaks, what balls they like to catch, high ones, low ones. There is a lot of work that goes into it, but they are both veteran guys that are experienced that I am looking forward to working with.


Do you also need to become comfortable with them, get to know their personalities?

Absolutely. Talking to Lance, I called him when they signed him. I am excited to get to know them as people and football players.


This is the first year there has been that much change at wide receiver. Is it going to be different for you?

It is, especially since we got so used to the guys that were here. You develop a great rapport with them and relationship both on and off the field. To have a bunch of new guys come in, and some young guys that are back, it’s going to be different but it’s fun. It’s a great challenge for me because I get to meet and develop new friendships.


Antonio Brown is now the receiver with the most experience wearing a Steelers’ uniform. Is that kind of crazy how fast that has happened?

It is different for such a young guy to be the veteran guy. But if you are going to have one, I can’t think of a better one with his on the field experience.