“Some debris on the floor and some chairs and things that were knocked over that he had to get through but what he did was — he tied the suspect up long enough for us to be able to get in and safely resolve it.” — Cpl. David Garner, Baltimore County SWAT, on the efforts of their K9, Raven during a tense standoff last week.

From Brian Kuebler’s report at ABC-2 News in Baltimore: 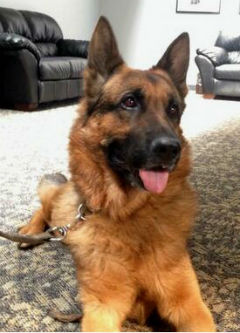 It has been exactly a week now since what police say was a mentally disturbed man rammed the WMAR-TV lobby with a truck creating a barricade situation and some tense moments.

The damage is still evident here at the station as we look to start rebuilding — but it’s not lost on us that the people we usually cover gave us the cover we needed that day, the women and men of law enforcement — and man’s best friend.

But as WMAR staff ran out of the building last week, Baltimore County police SWAT team members ran in.


A man was now in the station and no one knew where or what his intentions were.

That would quickly become obvious to Garner and the rest of the Baltimore County SWAT team as they made entry into the station. It was also quickly determined that Vladimir Baptiste was holed up in an upstairs edit suite.

Garner says they tried talking to Baptiste but he just kept ranting. That is when they decided to go in but they weren’t sure whether the suspect was armed.

For that job — Garner needed his partner — a German Shepherd named Raven.

“At that point we know we needed the dog and wanted the dog inside as one of our assets so I left the building and went and got him,” Garner said.

With so much glass strewn throughout the lobby — Garner had to pick up the trained k-9 and carry him to the steps.

He would be used upstairs to help contain Baptiste once the SWAT team made entry.

Baptiste was arrested without further incident and was charged with attempted murder.

No one was hurt in part because of the expert defensive tactics of this Baltimore County K9.

But we need to give an offensive assist to the Pittsburgh Steelers.

This German Shepherd was bought five years ago in part with a donation from the Ben Roethlisberger Foundation.

That’s why officers chose to name the dog Raven.


You can watch the incredible video footage as the event unfolded here.

You can learn more about Ben’s foundation here.