Just last month, Steelers Mexico sent photos and a message to show Big Ben that they “had his back”. Well, closer to home the Harr Family does too!


This Party of 5 shows their support for #7!


“We LOVE the Steelers! I grew up in Pittsburgh, but now live in St. Clairsville, Ohio, after marrying Brian. We had our wedding reception at Heinz Field (no place with a better view than the East Club Lounge)! We are now passing along our love of the Steelers to our three children, who are learning how to wave their terrible towels with pride!” — Rachelle “Shelly” Harr 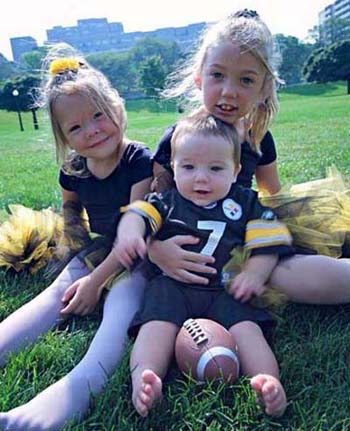 Meet Ashton Drennon and his big brother, Chase have much to celebrate this month! 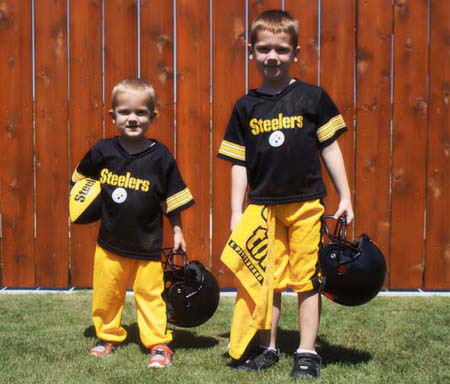 “This little Steelers fan was born April 23, 2010 with a tumor in his abdomen; he was diagnosed with Neuroblastoma, a “rare” childhood cancer a few days later. He started chemotherapy at 2 weeks old! Within the first year of his life he endured 4 rounds of chemotherapy, 2 surgeries, several blood transfusions, numerous IV sedations, permanent hearing loss and MUCH, MUCH more; but in the end, he came out a SURVIVOR! Take that cancer! However, even going through all that, he is a lucky one. He has lost several friends in the last few years. September is Childhood Cancer Awareness Month; the same month that Ashton will celebrate 2 years CANCER FREE! We are so blessed to have our son still with us today. He and his brothers continue to amaze and entertain us every day! The boys can usually be found running around the house decked out in their Steeler gear or pretending to be Big Ben as they launch the football at each other! Ashton is super proud to show off his black and yellow hearing aids, especially during football season! GO STEELERS!” — Brian Drennon

You can find some of the Drennon Family’s favorite links for cancer organizations under the photo of their sons in Ben’s Lil’ Fans album! 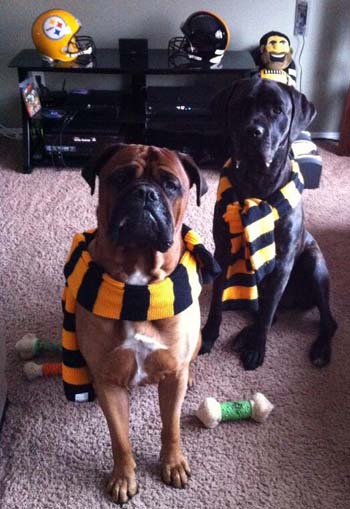 Hampton and Pouncey are wondering where the rest of the boys are! They have some serious TAIL-gating to do before the game!

Their human, Jaimie Griffiths, says they are the biggest (and scariest) Steelers fans in all of Canada!


You can check out a several more Lil’ Fans here, Big kid fans here, and quite a few four-legged fans here (we even have a horse who wears Steelers gear out in the pasture!).


*Thank you to everyone who submitted photos!