“I think every quarterback should believe they’re the best. Do I think there are better quarterbacks than me? Possibly. But would I take anyone else with the ball in their hands at the end of the game? I don’t think so.”  — Ben, from his interview. 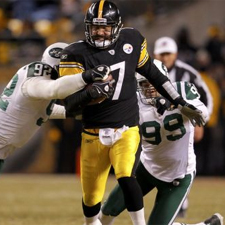 Ben Roethlisberger often wins on his worst days. He also has the best definition of quarterback toughness I’ve heard, one sure to send stats geeks running to their hard drives to see if it fits into one of their unfathomable formulas.

We broach the topic because it’s that time of year — time for everybody to rank the quarterbacks. I don’t know if Roethlisberger deserves to be ranked first, but I know this: He belongs in the conversation.

Won-loss record? Getting warmer. Roethlisberger is 69-29 in his career.

Which brings us to his definition of toughness. He was sitting at a quarterbacks’ round table a few years ago, with Sport Illustrated’s Peter King, when he delivered the following gem:

“Toughness is playing the worst game of your life but not backing down. Down 21 points and the defense is getting through, and you throw three interceptions. Staying in that game, keeping your head up, trying to drive your team when everything’s going wrong — that’s the kind of toughness I want in my quarterback.”

I think of last year’s game at Baltimore, when Roethlisberger — having a miserable night with a banged-up foot and broken nose — was presented with an opportunity to win and snatched it. His biggest play was fending off Terrell Suggs and shoveling the ball out of bounds to avoid a sack.

Is there a stat for that?

You can read more from Mr. Starkey’s column here.

“I understand how hard Ben’s job is as a quarterback. If Ben asks me if I was open and I was, I’ll tell him. If he asks me if I was covered and I was covered, I’m going to tell him I was covered. He’s looking for honest feedback, and I think if everyone gives him that, it makes his job a little bit easier.” — Heath Miller, from an interview with Scott Brown, Pittburgh Tribune-Review.