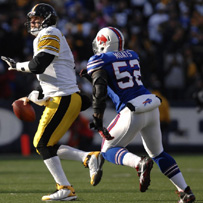 This Pittsburgh Steelers vs. Buffalo Bills match-up was a tale of two halves (and then some overtime). The Steelers completely dominated the Buffalo Bills in the first half, heading into the locker room with a 13-0 lead. But the Steelers blew the lead and had to keep this exciting. This game actually went into overtime. The Bills, who were predicted to go 0-16 this season, gave the six-time Super Bowl Champions a run for their money.

But it wasn’t so in the first half. On the very first drive, they went 78 yards, with running back Rashard Mendenhall scoring on a 1-yard touchdown run, his ninth rushing TD of the season. He also ran for a season-high 151 yards. It was a beautiful 13-play, 78-drive led by quarterback Ben Roethlisberger that took 7:54 off the clock.


You can read his full blog here.

From the Atlanta Journal Constitution:

Buffalo’s Stevie Johnson sat with his head down at the end of the bench as Shaun Suisham hit a 41-yard field goal with 2:14 left in overtime to secure the Pittsburgh Steelers’ 19-16 victory over the Bills on Sunday.

The wide receiver was upset because he could’ve ended the game in the Bills’ favor on the previous possession by dropping what would have been a 40-yard touchdown pass from Ryan Fitzpatrick.

The Bills took the Steelers’ best shot and then punched back to make a game of it in the second half.


You can read their game summary here.

From the Pittsburgh Post-Gazette‘s Gerry Dulac:

Ben Roethlisberger passed for 246 yards and was not intercepted for the second game in a row, but his biggest play was an 18-yard scramble on third-and-17 that led to the field goal that gave the Steelers a 16-13 lead. Roethlisberger did a good job converting third downs in the first half (7 of 9), controlling the ball for 24 minutes. He also converted a third-and-8 in overtime that led to the winning FG.


You can read his Steelers Report Card here. 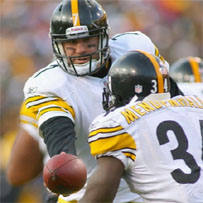 Tomlin said quarterback Ben Roethlisberger continued playing despite spraining his right ankle in the fourth quarter after being sacked for a 7-yard loss by Marcus Stroud. Roethlisberger shrugged off the injury by rushing 18 yards for a first down on the next play.

Ben was asked how his foot was injured, “My foot was in the ground and someone was driving me backwards, and my foot couldn’t get out of the ground, so my knee just got bent sideways.”

As to whether it will keep him out of next week’s game, Ben simply answered, “We’re going to enjoy this one for now. We’ll start thinking about Baltimore, maybe tomorrow.


You can read all the comments here.


You can check out a few game photos here.

You can watch video of Ben’s run for the first down here.

During the pre-game show this afternoon, CBS featured a segment on the recent Forty for Forty Dinner at Heinz Field hosted by Steelers President Art Rooney II and former running back Rocky Bleier to benefit the Flight 93 National Memorial, honoring those who were lost on September 11, 2001.

The dinner brought together 40 former Steelers players to support the families of the 40 passengers on the flight that went down in Shanksville, Pa., just an hour away from Pittsburgh.


You can remember them as well by visiting the National Memorial site here.

You can help the Steelers in their effort to get the memorial built by donating here.