Home/News/Looking ahead to Sunday…
Previous Next 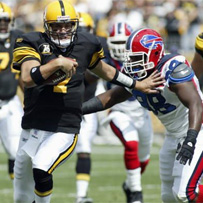 Pittsburgh holds an 11-8 lead in its all-time regular-season series with the Bills and has won seven of the last eight meetings between the teams, including the last three matchups. The Steelers posted a 26-3 victory at Heinz Field in the most recent encounter, which took place in 2007, and also prevailed in stops in Buffalo in both 2001 and 2004. Buffalo last topped Pittsburgh via a 24-21 decision at Ralph Wilson Stadium in 1999, the last year the Bills reached the playoffs.


You can read the rest of their preview here.

From the Sporting News:

For the fantasy football crowd…

Ben Roethlisberger and Co. can’t get caught looking ahead at a schedule that features the Ravens, Bengals and Jets over the next three weeks. Roethlisberger is averaging 263.2 yards with 12 touchdowns and four interceptions this season, and he should be able to move the ball against a Buffalo defense that has struggled to create sacks and interceptions.

From the “Inside the Bills” blog at Bills official site:


You can read the rest of the blog here.

From the Steelers official site:

The rest of the way…

There isn’t any better time than now in the minds of the players to start a winning streak that they hope will extend their season.

“In this league you have to go on runs,” said Roethlisberger. “You want to get hot and you want to get hot at the end of the year and you want to be playing your best football and that entails putting wins together and that is what we need to do. It’s that time of year where we need to start stacking up wins and start focusing on what you can do to be the best team. So that’s why it is important for us to come and play a good football game and give them our best shot.”

Quote of the Weekend:

“They are an awesome group to have on my side. And on Sundays I always feel a little bad for the other quarterback, but not too bad.” — Ben, on the Steelers defense, from Steelers.com.