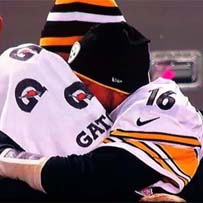 Ben Roethlisberger was the first to greet Charlie Batch, grabbing him tightly for a 30-second bear hug that summed up everything about this emotional day, this resilient team, this improbable win.

The Steelers had just beaten the Ravens team they supposedly couldn’t beat — not in this stadium, not under these circumstances, not with this man at the controls, and it meant everything to both of them.

“You go out there and that was a big win,” Batch said. “It was one of those moments, and he and I shared it. I’ll keep it between us what was said, but it was something that was special.”

You can watch highlights from the game here.


Also, congratulations to Charlie, he is the Steelers Digest Player of the Week!