Home/News/Ben: “I’m anxious, I want to be out there”
Previous Next

From Ben’s interview with the media after practice this afternoon: 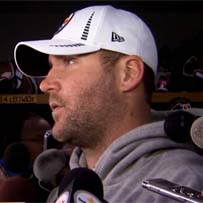 
On the velocity of his throws –

I’m getting there. I have to talk to Heath. He’s my barometer. Heath lets me know how close I am to one hundred percent on velocity and stuff like that.


On how his shoulder and chest are feeling during practice –

It’s cold out there so that doesn’t help. It’s just a little bit of pain and tightness, but we’re not worried about that feeling right now.


On how he feels mentally about returning –

From Coach Tomlin this afternoon on Ben’s practice:

“I thought it was a positive day for Ben. He threw the ball around both vertically and horizontally. I thought the ball had good velocity, particularly in a few instances.

“Obviously, we’ll see how his body responds to it tomorrow, but I thought today was a good step. We’ll see what tomorrow holds for us.”


You can read more from Coach Tomlin here.