“It wasn’t pretty early. It was not really one of those that you’re going to go home and watch the whole thing and be proud of, but at the end of the day it’s the scoreboard that matters.” — Ben, post-game. 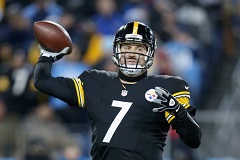 Facing an onslaught of Titans’ blitzes, Steelers quarterback Ben Roethlisberger completed 21 of 32 throws for 207 yards and a touchdown with an interception in Monday’s 27-24 road win.

The Steelers trailed the lowly Tennessee Titans by 11 points in the fourth quarter, and it looked as if another of the NFL’s bottom feeders would claim them as a victim.

And then the Bell went off in the fourth quarter for them.

Le’Veon Bell, who told his teammates Sunday night that he would rush for 150 yards, rushed for 74 of his 204 yards in the fourth quarter, including their first offensive touchdown, as he put the team on his back and carried them to a 27-24 victory.

“He was so impressive,” Roethlisberger said of the second-year halfback. “The things he does — catches the ball, runs the ball with power, finesse.”