“I feel like offensively we still left a little bit out there. But we scored enough.” — Ben.

Ben was 23 of 33 for 265 yards, two TDs and no interceptions as the Steelers rallied to beat Houston 30-23 and improve to 4-3. Ben threw his two TD’s while the Steelers were taking advantage of two Texans turnovers to score 21 points over the final 87 seconds of the first half.

Antonio Brown threw for a touchdown during the scoring flurry and had nine catches for 90 yards.


From Will Graves, AP: 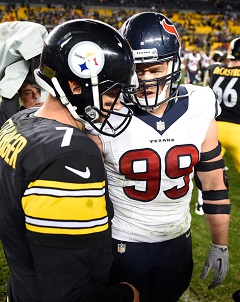 One dizzying sequence, and the Pittsburgh Steelers were in complete control against J.J. Watt and the Houston Texans.

Ben Roethlisberger passed for two touchdowns and wide receiver Antonio Brown added another on a gadget play during a decisive surge late in the first half, helping the Steelers rally for a 30-23 win over the mistake-prone Texans on Monday night.

Pittsburgh (4-3) needed just over a minute to turn a 10-point deficit into an 11-point lead as the Texans self-destructed while losing their third straight.

Ryan Fitzpatrick was 21 of 32 for 262 yards with two touchdowns and an interception but the Texans were undone by three turnovers.

Watt recovered a fumble and picked up his third sack of the season but was neutralized for most of the second half.

By then, the Steelers were on their way to the win.

One frantic stretch turned the tide.

Pittsburgh was listless for the first 25 minutes, letting Foster and Fitzpatrick do whatever they wanted as the Texans raced to a 13-0 lead that seemed larger.

A 44-yard Shaun Suisham field goal with 3:08 left in the half gave the Steelers a minor boost.

A strike from Roethlisberger to Bell provided a much larger one shortly after the 2-minute warning. Roethlisberger hit the versatile back for a 43-yard gain — Pittsburgh’s longest pass play of the season — to move the ball to the Houston 35.

Roethlisberger then hit Bryant, who struggled staying healthy in the preseason and spent the first six weeks on the inactive list, with a beautiful rainbow Bryant caught at the back of the end zone to make it 13-10 with 1:27 left.

The Steelers were just getting started.

And from Ron Cook, Pittsburgh Post-Gazette: 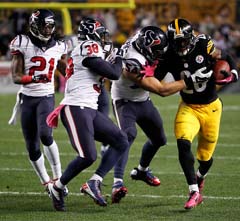 The Steelers trailed, 13-0, midway through the second quarter. It wouldn’t be quite accurate to say the offense was doing nothing because quarterback Ben Roethlisberger had lost a fumble, leading to a Houston field goal. The crowd, such as it was minus about 9,000 no-shows, was booing lustily. There was an overwhelming feeling the home team was headed toward another crushing loss at Heinz Field that surely would put their season in jeopardy.

Bell didn’t allow it to happen. He took a little dump pass over the middle from Roethlisberger on a third-and-10 play and, after shrugging off Houston linebacker Brian Cushing, turned it into a 43-yard gain. It was the play of the game. It gave the Steelers life. They had to settle for a field goal, but, as it turned out, it was just the start of their best offensive quarter of the season. They scored three touchdowns in the final 1:27.

“I saw it was man-to-man coverage,” Bell said. “I knew I had a chance to get the rock. I made sure I won the match-up [against Cushing].”

“That play was huge. It flipped the field. I think it was our first third-down conversion. It got us started.”

“It’s not that he can do anything. He can do everything. He’s such a difference-maker.”

Bell caught a 28-yard screen pass to set up the Steelers’ first touchdown, cutting the Houston lead to 13-10. Later, he had a 2-yard touchdown catch to give the Steelers a 24-13 lead. He finished with eight catches for 88 yards.

“His awareness is unbelievable,” Roethlisberger said. “On that touchdown play, he went in motion and he was supposed to run a fade pattern. He saw the coverage and broke it off [outside safety D.J. Swearinger]. He made that play.”

Roethlisberger said he never doubted the Steelers offense would get rolling. “We always believe and have faith regardless of how things are going.” But Roethlisberger was mighty glad Bell stepped up and led the way. “I say it all the time. I think he’s one of the best all-around backs in the game. He proved it again.”