Home/News/Just in case
Previous Next


“To be like somebody, somebody like a Joe Montana that won a ton of Super Bowls. That’s obviously the ultimate goal.” — Ben, from that first One-on-One.

10 years ago when the Steelers drafted a young Miami of Ohio quarterback, it had been 24 years since they had taken a quarterback in the first round. Quite frankly, that Ben Roethlisberger was none to happy he was the third quarterback taken in the Draft after Eli Manning and Philip Rivers.

Then, during the season, the starter, Tommy Maddox, went down and was injured, and [Ben] became the first rookie quarterback to go 13-0 in a season. That quarterback said he was motivated by a chip on his shoulder.

Now that it’s a decade later, what advice would the 32-year old Roethlisberger have for the 22-year old rookie?

Ben: Enjoy it. It goes fast. I remember when I got here, I tell the story all the time – Jerome pulled me aside at one point, and said, ‘Enjoy this because it goes really fast’. I remember thinking to myself, ‘right, okay whatever.’ Now, It’s amazing it’s been ten years. I tell the young guys the same thing Jerome told me. 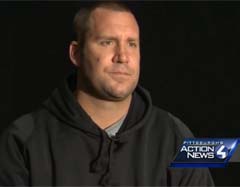 Sally: In that time, there was the glory of winning two Super Bowls, the pain of injury, the humiliation of scandal, and the start of a family. How would you analyze your evolvement?

Ben: I would answer your question with, ‘Yes, people can change, and people can grow up.’ I think it’s to each individual what they want to do. I’m thankful for the freedoms we have in this country, that I’ve got a loving family. You can make smart choices and decisions when it comes to your life.


Sally: That loving family, with wife Ashley, grew in the off-season. Daughter Baylee was born in March, joining her big brother Ben Jr…

Ben: Life is fun, especially when you go home! I tell my son, come here and give me a hug! Can I get a hug? ‘Yep’, he will run over and give you a hug. That’s the big thing – the patience, kindness, love. It makes you appreciate your life so much more because these children are – they are totally dependent on you.


You can watch it here.