“I’m not the only guy playing with injuries, you know. I’m not going to complain about it. I’m going to go out and do my best. I think what’s more impressive and more important is how the guys that stepped up and filled in for people played. I don’t think I have enough time to name all the guys, there were so many. But I was just so proud of them.” — Ben, post-game. 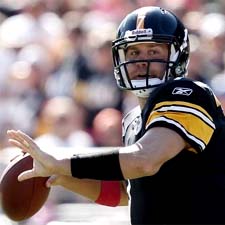 Ben Roethlisberger’s sprained left foot is just fine thanks. And so, apparently, are the defending AFC champions.

The quarterback tied a team record by throwing for five touchdowns — including two to Hines Ward— and the Pittsburgh Steelers rolled past the Tennessee Titans 38-17 on Sunday.

Other than a slight limp when he ran, Roethlisberger appeared to have no issues with his sprained left foot, also hitting Mike Wallace, Heath Miller and David Johnson for scores as the Steelers (3-2) ended Tennessee’s three-game winning streak.

The early demise of the Steelers has been greatly exaggerated. After getting pushed around by Houston last week, Pittsburgh was the bully on the field against a Titans team that had convincing wins over two AFC North teams (Baltimore and Cleveland). It didn’t matter that four starters were sidelined (nose tackle Casey Hampton, linebacker James Harrison, defensive end Aaron Smith and left guard Chris Kemoeatu), their starring running back (Rashard Mendenhall) didn’t get on the field because of a hamstring injury and their starting quarterback (Ben Roethlisberger) played with a sprained foot.

“The running backs did a great job. I told Isaac [Redman] the numbers are probably not indicative of how he played. He did such a great job running the ball, picking up blitzes. But to me, that’s what I expect from him, and Jonathan stepping up and doing a great job. I think they expect that of themselves. So I don’t think anyone in that room was surprised at how great of a job they did.” — Ben, post-game. 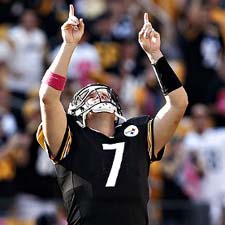 The Steelers — battered, bruised and unbowed — ran out to a big lead and beat the Tennessee Titans at Heinz Field today, 38-17.

Hines Ward caught two touchdown passes of 7 and 5 yards. Heath Miller caught an 8-yard touchdown pass, and David Johnson caught a 1-yard scoring pass. Mike Wallace caught the final one of 40 yards with 2:39 left. Roethlisberger and Wallace have now hooked up on 10 touchdown passes of 40 or more, stretching their team record.

Backup halfback Jonathan Dwyer, playing only because of injuries to Rashard Mendenhall and Mewelde Moore, already had 100 yards on five carries by the end of the third quarter and finished with 107 yards on 11 carries.

“Ben Roethlisberger is simply too tough to miss today’s game despite an injury that would keep a lot of guys on the sidelines.” — Steve Schwarz, fantasy football editor for The Sports Network

The Steelers didn’t have their best pass-rusher, their leading rusher and two starting defensive linemen.

But they did have Big Ben.

No one could say where the renewed sense of urgency came from Sunday, although the importance of this game should have been clear to every Steeler when Roethlisberger put on an oversized shoe with a steel plate in the bottom to stabilize his sprained left foot.

In warm-ups, a hobbled Roethlisberger trailed his teammates sprinting onto the field. After the opening kickoff, Roethlisberger was the one who was leading everyone.

This wasn’t just a gutsy performance. It was a punch-the-other-team-in-the-gut effort.

Asked how his foot was feeling after the game, Roethlisberger said, “We won the game big-time, so it feels good.”


You can read the rest of Mr. Hensley’s blog here.

“I just don’t want to let my guys down. I want to give them my best. I’ll be there until they take me off in a cart, which has happened before. Regardless of injury, there are lots of guys going through it. We just have to go out and do our best.” — Ben.

You can watch Ben’s post-game presser here (about 1:04 into video).


You can watch video of game highlights here.


You can check out a few photos here. 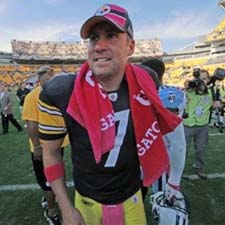 It was his second career five-touchdown game.

The first was on November 5, 2007 in a 38-7 win against the Baltimore Ravens at Heinz Field where he threw all five in the first half.

He was named the Steelers Digest Player of the Week this evening.