SI.com‘s Don Banks, from his “Inside the NFL” column today: 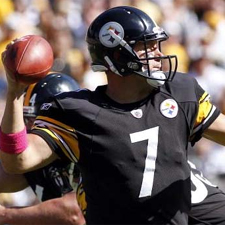 I refuse to read, listen or entertain any more injury reports regarding Ben Roethlisberger.

Roethlisberger and his sprained left foot carved up the Titans’ heretofore difficult defense with five touchdown passes on Sunday in Pittsburgh.

How can we ever know when Roethlisberger is really hurt if he continues to elevate his game when injured?

In Big Ben’s case, being listed as questionable is a guarantee of being sensational.


You can read more from Mr. Banks here.

Ben has been nominated for the FedEx Air NFL Player of the Week!

He is one of three quarterback’s chosen after Sunday’s performance. He is up against the Packers’ Aaron Rodgers (396 yards and 2 scores) and the Chiefs’ Matt Cassel (257 yards and 4 touchdowns).

Ben “tossed five touchdowns and one interception, and tallied 228 yards through the air in the Steelers’ 38-17 win over the Tennessee Titans.”

Ben’s 40-yard touchdown pass to Mike Wallace against the Titans was the 10th time the two have “hooked up for a touchdown of 40 yards or longer. And they’ve done it in only 32 games together.”

Only one other active tandem has more touchdowns of 40 yards or longer – Peyton Manning and Reggie Wayne of the Indianapolis Colts with 12. (Elias Sports Bureau via Gerry Dulac, Pittsburgh Post-Gazette) 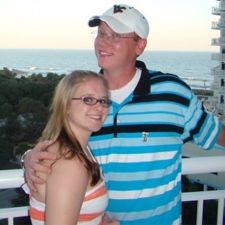 The first goes out to 26-year old Christopher Tolley (pictured) from West Virginia. Christopher is currently in a coma at the Cincinnati Clinic after initially suffering chest pains last Tuesday (October 4th) which lead doctors to discover a tear in his heart, requiring open-heart surgery.

As his friend Rob Klein said, “80% of ruptures have a mortality rate and 50% of people don’t even make it to the hospital… Somehow he survived 2 days, a flight to Cleveland, OH from Charleston, WV and a 6-hour surgery. A Miracle!”

Christopher still has a long recovery road ahead. Please keep him in your thoughts and prayers!


The second Shout Out goes to Augie Wilson, from Las Vegas, who is battling cancer and is currently in the Intensive Care unit recovering after surgery on Friday. We did a Shout-Out for his son Isaac last year at this time who sadly succumbed to cancer in December, 2010.

Again, please keep Augie and his family (wife Vicky, daughter Gina and his two grandchildren Tyler and Sierra) in your prayers, Steeler Nation!