As we get ready for the start of the season next week, here are a couple of Steelers fan moments from this summer for your holiday weekend viewing!


You may remember the story from August 11th of Jeffrey Metz, a young man with cerebral palsy who traveled 4,200 miles just to attend training camp in the hopes of meeting #7…

Well a fan in the crowd by the name of Michael Hershey, of Wheeling, WV began to videotape the interaction between Ben and Jeffrey after Ben signed the young man’s football. He sent it to Mickey Metz, Jeffrey’s uncle, who posted the video to Youtube for others to see:

Now what the video doesn’t show is Ben getting in the driver seat of the golf cart himself and taking Jeffrey and the Metz family back to their car.


You can read the story from Mr. Metz here, and from the perspective of another Steelers fan, Mr. Kevin Davis here, titled “Happy ‘Training’ Campers”.


After meeting Ben at training camp and receiving an autographed Nike from him before they left, Jeffrey Metz insisted he was going to take his new prized possession with him to Disney World and pose with Mickey Mouse…and the shoe! Jeffrey is a man of his word! After returning to his uncle’s home in Orlando, Jeffrey took an unscheduled visit to Disney World.


“I feel extremely blessed to be a part of that. Meeting Ben made all the traveling I did worth it. He has been my favorite player for a long time. I never thought he would do what he did for me. It is something I will never forget. If I could talk to Ben one more time, I would tell him that day brought so much joy into my life. I can never thank him enough for that. Go Steelers!!!” — From Jeffrey Metz, after seeing the video on the website today.

Remember Julia Pollock? She received the video from Ben that he made for her during his Kids Camp in June after her long stay in the hospital. 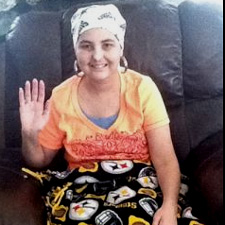 Julia’s father, Alan Nagy had this to share with those who sent so many well-wishes to her after seeing her story:

We’re so very grateful for your thoughts and prayers, when Julia first came from the hospital she could barely walk now she’ s getting around pretty good, but we had a little bad news today. She had CAT scan and MRI of her brain on Monday and today she had her Spinal fluid drained to relieve the pressure and then Chemo put in, unfortunately the pressure was up this week, and the MRI showed swelling of the brain, so tomorrow she’ll have a MRI of her spine and see the Neurologist to go over the scans to see why the pressure is going up. Hopefully the news will be good but whatever it is Julia will keep fighting.

Julia is so excited to go to the Steelers first game here in Denver. She’ll be going with her brother, sister and my grandson – all big Steeler fans! She’s working very hard to be ready for the game. I think she will do it!

Again thanks for all the thoughts and prayers from you and all the Steeler Nation fans, our family is very grateful.


*Thank you to everyone who has emailed and messaged through Facebook to ask about Julia! 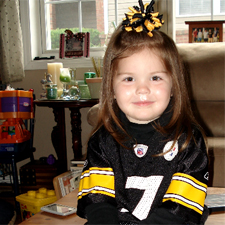 Oh, and the next time you’re in Findlay, Ohio, and find yourself with a BIG appetite…

Now even though it’s big enough for two to share, Brad says he finished the whole thing by himself. Ouch!

Just as an FYI: Wheelbarrow to help roll you out to your car afterwards is not included with your meal purchase!


Hope everyone has a safe and happy Labor Day weekend!