“There’s no one to blame but myself. I already told my teammates and coaches that it’s my fault. It’s on me. It’s disappointing. I hate to let my team down, my coaches, the fans. That loss is squarely on my shoulders. I’ll take that and get better and learn from it.” — Ben 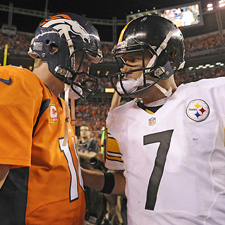 Roethlisberger made quite a few vintage Roethlisberger plays by shrugging off pass-rushers and making impromptu plays with his legs and big arm.

He really had to work hard for everything the Steelers offense got. But Pittsburgh took very few shots deep downfield — probably because of protection concerns — even with Mike Wallace now on board.

The Steelers did incorporate Heath Miller more than in recent memory, and Miller could be their best red zone weapon.

He came up big, time and time again. But that wasn’t enough on this night.

Playing behind an offensive line that lost two starters mid-game, Ben Roethlisberger completed just 22-of-40 passes for 245 yards, two touchdowns and an interception in Pittsburgh’s Week 1 loss to the Broncos. Under siege nearly all evening, Roethlisberger pulled plenty of Houdini-acts in the pocket, but ran out of magic late, tossing a devastating pick-six with just 1:58 remaining before taking three sacks on Pittsburgh’s desperation final drive. The good news is that Big Ben looked 100 percent following his late-2011 ankle woes, and appeared to be on the same page with No. 1 receiver Mike Wallace following his lengthy holdout. Ben found “60 Minutes” for four catches, 37 yards and a score.

‘‘Roethlisberger was awesome on third down. Wasn’t much fun sitting on the bench there all night. Great job by our defense in the end, getting that turnover.’’ — Peyton Manning

Through the early stages of the fourth quarter, Ben Roethlisberger was the primary reason the Steelers held a 19-14 lead over the Denver Broncos. To that point, Roethlisberger had completed 20-of-34 for 216 yards and two touchdowns, and on the two touchdown drives, he converted six third-down situations with his passes, including both touchdowns. He finished 22-of-40 for 245 yards, including a late interception that was returned for a touchdown.

“That’s what Peyton kept saying to me: ‘You guys killed us on third down.’ We did. But at the end of the day it doesn’t matter when you lose the game.’’ — Ben

Ben Stat: With the completion to Heath Miller in the last minute of the third quarter, Ben earned 2,100 career completions.

You can read a game re-cap from Ed Bouchette at the Pittsburgh Post-Gazette here.