From the Pittsburgh Post-Gazette: 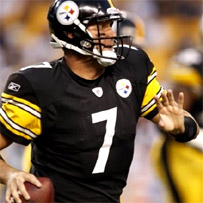 Roethlisberger started his third consecutive preseason game, played the first two series and once again led them to three points, the third time in three games he has done that. This time, though, Roethlisberger did it against Carolina’s second-team defense. Roethlisberger completed 4 of 6 passes for 39 yards before he gave way to Leftwich with 53 seconds left in the first quarter.

You can read the full story here.

Roethlisberger came out working in the no-huddle offense to start things. He was forced to scramble up the middle for one-yard to start the drive and Rashard Mendenhall went off left guard for six yards. On third and three Roethlisberger was able to pull in Maurkice Pouncey’s high shotgun snap, but couldn’t recover and was sacked for a 10-yard loss.

On third-and-17 Roethlisberger hit Arnaz Battle for 16-yards, with his knee ruled down before getting the first down. The Steelers went for it on fourth-and-one and Mendenhall delivered with a nine-yard run up the middle. Roethlisberger connected with Heath Miller for 13 yards and Mendenhall continued to move the ball with carries of four and five yards.

Mewelde Moore moved the chains going off left guard for four yards. A holding call negated an 11-yard run by Moore and an incomplete pass gave the Steelers second-and-20 from the Panthers 25-yard line. Roethlisberger hit Moore for seven yards and Battle for three, but they weren’t able to convert the first down. Jeff Reed got them on the board with a 33-yard field goal for a 3-0 lead.


You can read their full game summary here.

Leftwich (4 of 6, 39 yards) was hurt on an 18-yard completion to Emmanuel Sanders as running back Mewelde Moore and safety Marcus Hudson collided near him with 10:25 remaining in the first half. Leftwich immediately clutched his knee in pain.

While Dixon talked to reporters, Roethlisberger — leaving the Steelers’ locker room for the last time in at least a month — leaned close and offered words of encouragement.

Roethlisberger will meet Friday with NFL commissioner Roger Goodell to learn if his suspension for off-field behavior will be reduced to four games, as expected, or stay at six games.

“It’s very tough, kind of emotional,” said Roethlisberger, who cannot practice with the Steelers while suspended. “I’ve just got to go do what I’ve got to do.”


You can read the full blog here.

You can check out the Post-Gazette’s slideshow from the game here.


If you missed the game…

(AP) Ben Roethlisberger’s suspension has been reduced from six games to four by NFL Commissioner Roger Goodell. The Steelers’ star quarterback met with Goodell early today and was told he could return on Oct. 17 against Cleveland.

The league said the “reinstatement is contingent on Roethlisberger continuing to adhere to the program established by our advisors and avoiding any further violations of the personal conduct policy.”

“You have told me and the Steelers that you are committed to making better decisions,” Goodell said in a letter to Roethlisberger. “Your actions over the past several months have been consistent with that promise and you must continue to honor that commitment.”

While suspended, he must stay away from the Steelers facility completely and have no contact with the coaches or front office. He can talk to teammates, but not about Steelers-related matters. He can not participate in team-related activities.

Roethlisberger is the first player suspended by Goodell under the NFL’s personal conduct policy who was not arrested, charged with or convicted of a crime.


What will Ben do during his time away?

This weekend, he’s going to re-group with close friends and former Steelers running back and current ESPN analyst Merrill Hoge, who has become his mentor.

“We’re going to talk about how to stay mentally sharp during the suspension,” Hoge said. “He’s going to work out with high school football players in Pittsburgh, coach my little guys in youth football here in northern Kentucky. He is going to use his services to help others, and make sure he’s ready to come back better than ever.”


You can read the full blog here.