“Ben Roethlisberger (113.8 QB rating) was his old resourceful self.” — Steve Serby on why the Jets lost, from his column in the NY Post.

More from the Jets point of view… 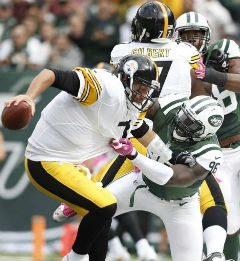 The New York Jets tried to make the day all about their defensive line.

Marty Lyons, a former member of the New York Sack Exchange, was inducted into the Ring of Honor at halftime. An honorary captain, he participated in the coin toss, flanked by former “New York Sack Exchange” teammates Mark Gastineau and Joe Klecko. Every member of the current defensive line joined the group, a link to then and now. It was as if the Jets were trying to send a message to the Pittsburgh Steelers, who had been struggling with pass protection.

But the Steelers got the last laugh.

The Jets finished with four sacks, but the 19-6 loss will be remembered for the one that got away. On the Steelers’ second possession, Muhammad Wilkerson blew a chance to get a safety. He had Ben Roethlisberger in his clutches in the end zone, but Big Ben slithered away and threw a harmless incompletion.

“That’s a big guy,” Wilkerson told ESPN New York 98.7 FM. “We talked about it all week. I went up high on him, knowing I should’ve kind of went low. But he’s a great quarterback. He slipped away and made the play for them.”

It was a scoreless game. The Jets missed a great opportunity to seize the early momentum.

“If we get a safety there, we’re up, 2-0, and those plays usually result in a nine-point turnaround,” coach Rex Ryan said.

The Jets got good pressure on Roethlisberger in the second quarter, sacking him twice on one series. It looked as if they were going to dominate the Steelers’ rebuilt offensive line, which included a new starter at left tackle, Kelvin Beachum. But the Steelers adjusted nicely, shifting to a quick-passing game. That offset the Jets’ pass rush.

Roethlisberger finished 23-for-30, with 264 yards and a touchdown pass.

“They were trying to get the ball out of his hand pretty quickly, there’s no question,” Ryan said. “If you look at the start of the game, they had four or five screens almost in the first 10 plays. They were trying to slow us down a little bit.”

And it worked. Wilkerson finally dropped Roethlisberger for a late sack, but it was too late.


You can watch & listen to the post-game comments of both Ben and Coach Tomlin here.

You can see a few photos of #7 from the game here.