A Super Bowl Sunday miracle for one Steeler Nation family…

A Super Bowl Sunday miracle for one Steeler Nation family… 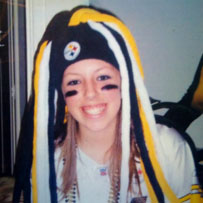 I received several emails from fans with prayers for 15-year old Shea Shaw, whose photo and story I included in a “shout out” on the Super Bowl XLV messages post last week.

For those who are unfamiliar with her story…

Shea, a sophomore at Los Gatos High School and a “big fan” of Ben and the Steelers, was struck by a hit-and-run driver while walking in a crosswalk on January 8th in San Jose, California.

She has been in a coma at Valley Medical Center Hospital since that time.

But on Sunday, February 6th, she was taken off the respirator and is now breathing on her own! She still has a tough battle ahead, but Sunday was definitely a win for her and her family.

“Those thoughts and prayers are helping and we all thank you,” said family friend Marcelena Stanford. “We have all come together as friends and family to bring love and support her way, in hopes that she will wake from this coma and be able to live and thrive in her future… what has happened to Shea has touched many people in this small community, including myself. I have known Shea and her mother since March of 2000 when Shea was 4-years old. Being the mother of a 3-year old myself I simply could not imagine this happening to me. What it must feel like to my friend Cari, Shea’s mother, absolutely breaks my heart.”

She asks that you continue to keep both Shea and her family in your thoughts and prayers! 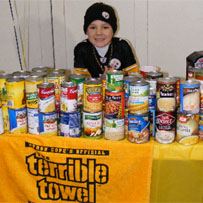 Seven-year old Garrett Cagle celebrated his birthday last weekend with a Steelers-themed party, wearing his favorite jersey and treating his friends to some delicious “Terrible Towel” cake. He even had black & gold balloons!

But according to his mother, Tammy, he wanted his guests to bring something for others….

Garrett asked everyone to bring a canned food item for the food pantry at his church because he said, “Ben would want us to do something good for other people”.

He ended up collecting over 100 cans of food for those in need!

Congratulations to Garrett for making a difference! You make Steeler Nation proud!


You can check out Garrett’s photos in the “Lil’ Fans” album here.

Just because the Steelers’ season is over doesn’t mean you can’t send in your favorite photos showing off your #7 pride, like the Hopkins family did this week!

Just send your photo submissions/stories to me (bigben7website@gmail.com) to be added to the “Fans” album!

To Kevin Thomas Swann and his parents this evening. Kevin is recuperating from a successful surgery today! Best wishes and prayers to him as he makes a strong recovery!