“Teaching the next generation”

Home/News/“Teaching the next generation”
Previous Next

“Teaching the next generation” 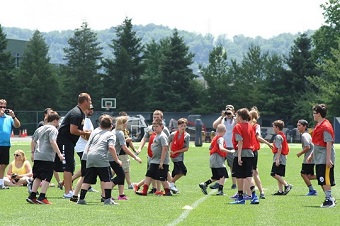 In just a few days the Steelers will report to Saint Vincent College for training camp, the final preparation before the season begins.

Before they headed to Latrobe, though, many of them went back to the grassroots of football, hosting their own youth football camps in Pittsburgh and beyond, or assisting at the Steelers Youth Football Camps.

“It’s a lot of fun,” said Roethlisberger. “You see a lot of smiles on their faces. I get to throw a pass to all of them. If I can teach one thing or supply one memory to these kids, just one, to one kid, that’s enough for me. If we can just reach one kid, then that means a lot to me.”

The Steelers held four youth football camps in the Pittsburgh area over the summer, a chance for the team to reach out to young players. The instructional camps feature current and former players, as well as area coaches, teaching the ins and outs of the game, while at the same time making sure football is fun for the kids.