You guessed it, but probably not for the reason you think! 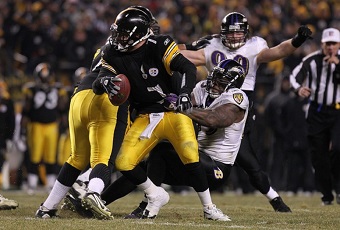 “I just like tackling quarterbacks,” said Suggs on The Dan Patrick Show. “But I do have my favorite.”

Though Patrick was initially curious about Suggs’ desire to bring down rookie quarterback, and thorn in the side of NFL veterans everywhere, Johnny Manziel, the Ravens’ outside linebacker had another signal-caller in mind: Ben Roethlisberger. And according to Suggs, one major reason a sack of the sizable Steelers’ quarterback is so satisfying is the difficulty of the feat.

“He’s very tough,” said Suggs. “It’s tougher than everyone thinks. He’s probably the toughest quarterback in the NFL to sack just because of his physical stature.”

Roethlisberger is listed at 6 feet 5 inches tall and 241 pounds. Suggs estimates the 32-year-old is an inch taller than he’s listed. As for the weight, we’d wager that Roethlisberger hasn’t been under 250 pounds since the day he was drafted. The combination of size and mobility makes for a pass-rusher’s nightmare, and Suggs has plenty of anecdotes describing what it’s like to try to bring down “Big Ben.”

“There was one time,” said Suggs. “It was a Sunday-night game in Baltimore in 2010 (photo above). They had just gotten a turnover and I was trying to get the ball back and I just couldn’t get him down. He was able to escape from me and throw the ball out of bounds.”

Ben has been nominated for the FedEx Air Player once again!


You can cast your vote here.