Did you miss Ben’s show today?


Check out the highlights right here from 93.7 The Fan & CBS Pittsburgh: 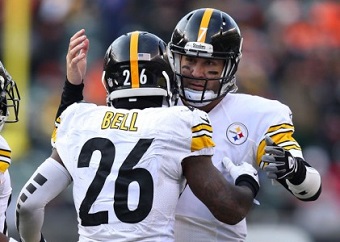 Following a key road victory against the Atlanta Falcons that has his team one win away from clinching a playoff berth, Steelers quarterback Ben Roethlisberger joined “The Cook and Poni Show” for his weekly “Ben Roethlisberger Show.”

Despite the Falcons coming into the game with a record of 5-8, Roethlisberger had stressed all week that they were a good team and reiterated that sentiment.

“Getting a win on the road against a good team, I don’t care what people think and say about numbers and records, they were a good football team,” Roethlisberger said.

Despite not throwing for a touchdown, Roethlisberger still had a solid performance going 27 of 35 for 360 yards. He talked about one of the more impressive plays he was a part of – Antonio Brown’s 28-yard catch, which he just managed to get both feet in bounds.

“I didn’t want to take anything away from the catch because the things he can do are flat out special,” Roethlisberger said. “We see it almost every single day in practice, so when you see it every day, I think I get more surprised when he doesn’t. If he wouldn’t have made it, I would have been more shocked than surprised. The outside world and the fans, when they see that catch they rave about it, which they should because it was a phenomenal catch and phenomenal footwork. It’s like when Heath Miller drops a pass in practice, we all stop and laugh and act like the world is coming to an end because things like that don’t happen.”

Playing with a lot of young guys on his offense, Roethlisberger talked about their flourishing offense, but said there are still areas where they can be better.

There was one key play from the offense though, where they put their foot down and secured a victory with a gutsy call on third-and-one by airing it out to Heath Miller for 25 yards rather than playing it safe and running the ball.

“[Todd] Haley said, ‘Hey, which one of these two plays do you like?’” Ben said. “To my surprise, they were both passes, and to me it just makes you feel good that they trust you to have the ball in your hands at the end of the game when it really matters and I felt like I earned that kind of trust.”

One of the plays from this week’s game that has gotten the most attention is the clean hit linebacker Jason Worilds put on Falcons quarterback Matt Ryan that was flagged for roughing the passer.

Roethlisberger weighed in on the hit saying it was clean, but that he doesn’t mind the league protecting its quarterbacks.

“Obviously, we didn’t like it because it was a penalty against our guys,” Roethlisberger said. “When I talked to Clete [Blakeman] the referee, he said it happened so fast he didn’t feel like he led with the crown of his helmet, he just felt like he hit him a little bit too high. You can’t be mad at a guy that made a judgment call like that in a split-second situation. Everyone’s human, there’s going to be mistakes.”

Roethlisberger talked more about the current state of football where hits like that are often flagged and fans think the game is being softened.

“It’s a violent, violent sport,” Roethlisberger said. “You get old men like me out there playing with these young pups that are flying around and hitting you. We don’t mind sometimes that they protect us quarterbacks. The NFL’s got to protect its investments. That’s the game of football now, it changes and transitions like anything else, so we play it the way that it’s supposed to be played.”


You can listen to the podcast here (bottom of page).


*Thank you to Joe Kapp!