Back on December 22nd, we received an email from Trevor Bentley, who simply wanted to share a video of the joy on his son Alex’s face and in his voice at receiving the gift of two tickets from a family friend to see dad’s team vs. Alex’s team on December 13th – 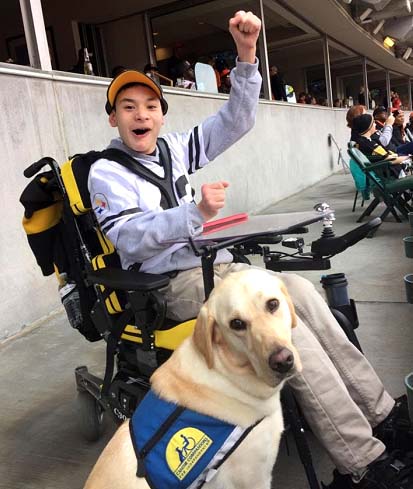 “I thought I would share this with Ben even though I am a diehard Bengals Fan!

My son somehow was converted to a Steelers lover by a grade school teacher and it has caused us great pain!

Living in Oxford, Ohio most of our life I still cannot support a Steeler even though we watched Ben develop as he played behind our house! My son on the other hand, believes that Ben is the greatest quarterback ever and when asked where he wanted to go for vacation this year he quickly said “Findlay, Ohio”!

I have tried to take him to the doctor and have this illness removed from him so that we can be an undivided home of Cincinnati Bengals, but I have run out of energy! He has even gone as far as making the great Bengal Icky Woods sign a Steelers key chain that my son donated to his foundation. I am not expecting anything, in fact it is difficult enough allowing these ugly colors in my home already, but just tell him that Alex Bentley loves him!” — Trevor Bentley.

You can watch this wonderful video here:


Now once Ben saw this, he decided to play Santa Claus to Alex – and at the same time, continue to make things difficult for his Bengals dad, Trevor. On Christmas Day, Alex opened up a box that contained one of Big Ben’s autographed, game-used Nike shoes: 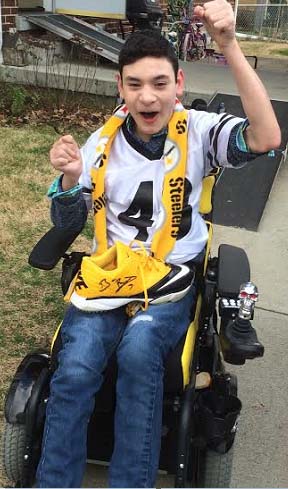 “Well, although I hate the Steelers, I love to see my boy smile! Thank you for that. The smell of Gold Bond Medicated foot powder doesn’t bother him at all, and in fact, he has taken this shoe to show at all our family holiday functions, as well as church.

He is a Steelers nut and had to have his new power chair decked out in black and yellow so he wanted you to see it. Alex says that he is flexing his muscles like Ben in the photo. Alex wants you guys to know he has bought his service dog, Wasilla, a black and yellow collar to go with his chair.

Please tell Ben thanks again for continuing the division in our home, and making it worse by making it in the playoffs. My son and I will be arguing back and forth while my wife tries to maintain her sanity! Good luck coming to the jungle this weekend and trying to beat the Orange and Black! Whodey!!” — Trevor Bentley, Bengals Dad.

Trevor, it was our pleasure!! Go Steelers! Go Alex!