Home/News/Thank you Steeler Nation!!
Previous Next 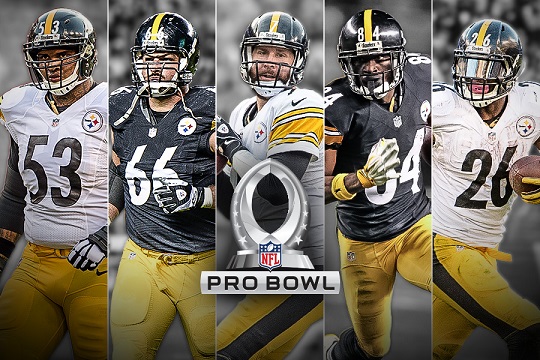 From Teresa Varley this evening at Steelers.com:

Christmas came early for a handful of Steelers’ players when they were selected to the 2017 Pro Bowl. Le’Veon Bell, Antonio Brown, Ben Roethlisberger, David DeCastro and Maurkice Pouncey all will play for the AFC squad in the annual game. This is the 16th straight season the Steelers are sending multiple players to the Pro Bowl, and the 25th time in the last 28 seasons.

Like fine wine, Ben Roethlisberger keeps getting better with age. Roethlisberger, who is in his 13th season, has been selected to the Pro Bowl for the fifth time.

Roethlisberger has completed 304 passes for 3,540 yards, and with two games remaining could eclipse the 4,000-yard mark for the fifth time in his career. Roethlisberger, who missed the New England game with a knee injury, has thrown 26 touchdown passes, and has been sacked only 17 times.

“Ben has amazing talent, strong arm, strong guy, big in big games, clutch throws, makes something happen,” said Steelers’ Hall of Famer Terry Bradshaw. “I have always admired him. I have the greatest respect for the job he has done and how he handles himself as a professional.”

Roethlisberger is tied for second in the AFC in pass completions of 25 yards or more (31) and is third in the conference in passing touchdowns (26). Roethlisberger keeps climbing the charts, currently 10th in NFL history with 298 touchdown passes, and passing yards at 46,535.


The Pro Bowl will be played on Sunday, Jan. 29 at Camping World Stadium in Orlando, Florida and televised on ESPN and ESPN Deportes.

The game will return to the traditional AFC vs. NFC contest, with 44 players from each conference selected via voting from players, coaches, and fans.

As an added feature this year there will be a Pro Bowl Skills Showdown, led by Pro Bowl Legends Captains, which includes Steelers’ Hall of Famer Jerome Bettis. The skills competition will include dodgeball, power relay challenge, precision passing, and best hands, which will feature a quarterback and receiver duo from each team showing off their skills. The Skills Showdown will air on Thursday, Jan. 26 on ESPN.