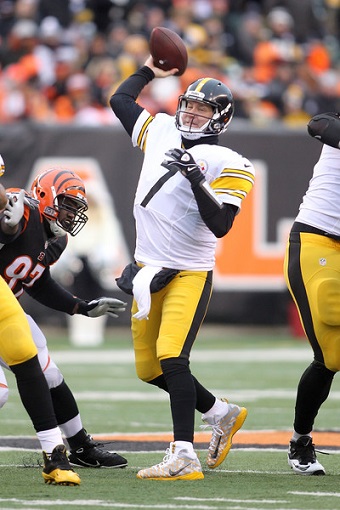 The Steelers came out of Cincinnati last week with a big 24-20 victory over the Bengals, but it’s not truly a Steelers-Bengals rivalry game without some Vontaze Burfict controversy, and that’s where things started on this week’s edition of “The #1 Cochran Ben Roethlisberger Show.”

At one point during Sunday’s game, Burfict threw Ben to the ground and the two exchanged words following a Burfict headbutt. Ben said Burfict didn’t really have anything to say to him, it was more what Ben said that stunned the Bengals linebacker.

On a more serious note about Burfict, Ben said he has talked to other players about his antics and even they aren’t sure why he plays the way he does.

“I think they roll their eyes with some of the antics, truthfully,” he said.

Ben was even asked how much the Bengals’ coaches could do to stop the dirty play.

“I don’t know what he’s [Marvin Lewis] able and capable of doing. Maybe he’s tried, maybe he hasn’t, I don’t really know, I can’t speak for what they do over there…I know some of their players they just can’t stand it and I know if it was on our team, we’d have to have a talk,” Ben said.

Looking at what their offense was able to do against Burfict and the rest of the Bengals’ defense, Ben praised their AFC North counterparts, but admitted it was his own team’s resiliency that won them the game after settling for six Chris Boswell field goals.

“They’re a good defense,” Ben said. “For us, it was just about weathering the storm, being patient. We got our points when we needed them, we had some penalties, obviously a touchdown taken back, we had some penalties that knocked us out of that redzone fringe, so we just kept with it and kept saying, ‘Ok, just be patient, it will happen.’”

One key aspect of the Steelers’ offense had to leave Sunday’s game early with a possible concussion. Ben talked about what Ladarius Green’s absence from the Ravens game this week would mean to the team.

“It will be big. We’re going to hold out hope, obviously he’s a very tough guy to fight back with what he’s fought back against just to get out there this year to play as well as he has, it’s huge for us,” Ben said.

Aside from the big back-to-back AFC North matchups Ben had to talk about, he discussed the college game a little bit and the recent trend of players skipping out on their team’s bowl game to prepare for the NFL Draft.

“I never in a million years would have considered not playing in that,” Ben said about playing in the GMAC Bowl in Mobile Alabama against Louisville in his final college game. “A part of me understands, I guess, where they’re coming from…but, Jiminy Christmas, it’s still so hard for me to say how do I leave my teammates after four years or three years, or whatever it’s been. You’ve been with those guys for the whole time and then you’re not going to play in a bowl game, your last time out there with them? Your last opportunity to be on the field with them?”

Ben said it even bothers him when coaches leave their teams for the bowl game after accepting another job.

“I hate that they leave their schools to go coach the new school, or start recruiting and don’t get to be with your team, that even bothers me. So, for players to do it, this is the first I’ve ever really heard of it and now more people are doing it. I don’t know, it could be a really slippery slope moving forward, but I would never ever think about not playing in that game with my guys,” he said.


You can listen to more from Ben’s show here.