That’s Lombardis with an “s”

Home/News/That’s Lombardis with an “s”
Previous Next

That’s Lombardis with an “s”

“Waking up today to see how it was going to feel, and it feels great. That is kind of what I anticipated. We have been working more than usual in the offseason in terms of throwing. I’ve put together a regimen of two to three days a week throwing for the last two months, if not longer. I think the plan is still to pitch-count if you will through training camp. I worked really hard (Monday) in terms of a lot of throws. I will try half that amount today and then tomorrow back off again, just to see how it’s going to feel. This is a really different training camp. You are not really doing one-on-ones; you are not doing seven-on-seven right now. We are building up, working on timing with receivers, tight ends, running backs. I have had no setbacks. It feels really, really good. I am really excited about that.” — Ben, during his interview with the media today. 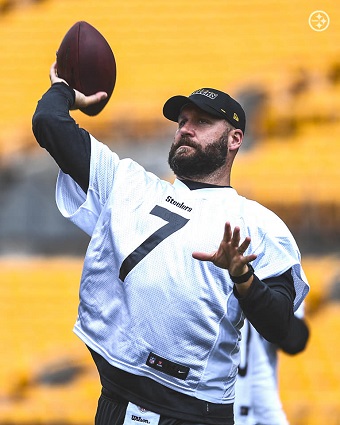 This offseason, we saw peeks of hope. First, there was a video of Roethlisberger throwing in an empty gym. Then, video of him throwing to his teammates surfaced and the reviews started to come in, with teammates singing the praises of how the all-everything quarterback looked.

And now, almost 11 months after Steelers Nation collectively had their heart in their throats, Ben is back.

Roethlisberger has resumed throwing at Heinz Field with the team’s training camp underway and is happy to be back, even if he was a little nervous out of the gate.

“I am very nervous by the way. I am not sure why,” admitted Roethlisberger about talking to the media during the start of a zoom call. “I haven’t spoken to you guys in so long. Forgive me if I take a minute to think about some of my answers.”

Roethlisberger said he threw a lot on Monday, and that he felt good doing it, even almost 24 hours later.

Roethlisberger is returning from surgery on his throwing elbow, something that could hinder any quarterback. But, heading into his 17th season with the black and gold, he isn’t letting it hinder him at all and never doubted that he would return in 2020.

“I think any athlete, any competitor, will tell you they want to go out on their own terms. It doesn’t happen all the time, we don’t always get lucky. Whether that’s trades, cuts, injuries, whatever that is. I think that if I felt that I was closer to the end, it might have been more of a decision for me to think longer about coming back or not. But I didn’t feel that I was close to that yet. I’m not saying I’ve got 10 years left in me, but I definitely feel like I’ve got some really good years left in me.

“And I just want to win Lombardis. And I say that with a plural on the end.”

You can watch Ben’s interview here.

You can see all the latest photos here.