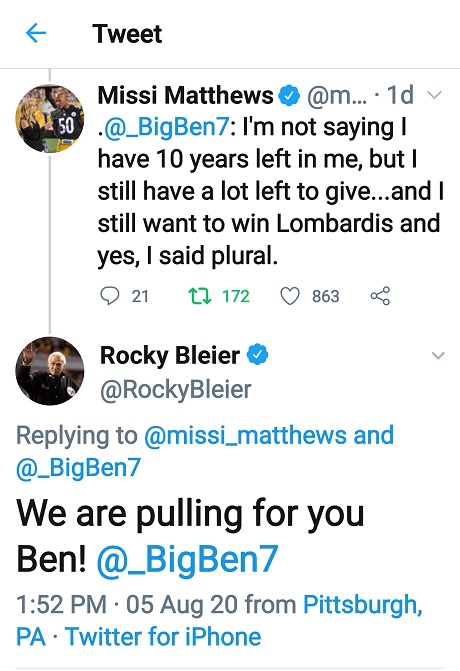 Johnson loves how Ben is looking: Diontae Johnson doesn’t fully know what life with Ben Roethlisberger at quarterback is like. Johnson worked with Roethlisberger sparingly early on last season, but barely got a taste for the quarterback’s talents before Roethlisberger’s season ended after Week 2 with an elbow injury.

Since the end of the 2019 season, Johnson has been thinking about what it will be like to be on the field with Roethlisberger. It took a while after a virtual offseason due to COVID-19, but the two are back at it and Johnson couldn’t be happier.

“I thought about it since the end of the season, just getting back ready and expecting Ben to come back 100 percent,” said Johnson. “I am looking forward to getting on the field with Ben this year and being able to help him win games and a championship too. I know how hard he worked this offseason to get back healthy and I know how hard I have been working to prepare myself for this season. To be able to get back on the field with him this year is amazing. I can’t wait to get it going.”

Johnson has already had the opportunity to catch passes from Roethlisberger during the team’s training camp at Heinz Field, and he loves what he is seeing as Roethlisberger has already cut loose and is throwing tight spirals according to Johnson.

“Ben’s arm is way better than it was last year,” said Johnson. “I am just trying to help him win games.

“Everybody wants to play for Ben. He is our leader. He is our quarterback. Everybody is locked in every play, knowing what we have to do. Just the energy he brings to the offense, you want to play for a guy like Ben. He will help you make plays and you want to make him look good.

“He is different this year. He is more excited. He is anxious to get on the field and play with us. That makes you want to play for him even more. That is one of the things I have seen from him, him engaging with me more this year. Being able to talk to him and have that connection, we are going to keep building that.”

Johnson is hoping he can be a go-to guy for Roethlisberger this year, a home run hitter who can take the top off the defense and make plays down field.

“I feel like I can be that guy,” said Johnson. “My ability to make plays off the line, out of my breaks, and make plays down the field gives him an option to come to me on third down, whatever down it is. I just want to be consistent for him.”