The 2014 Steelers schedule is out!

Home/News/The 2014 Steelers schedule is out!
Previous Next

The 2014 Steelers schedule is out!

From Bob Labriola, Steelers.com this evening:

“TV loves the Steelers on primetime” 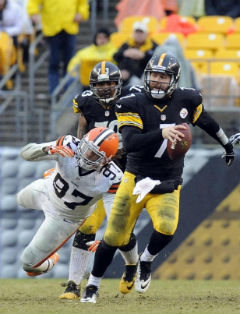 In 2014, the Steelers will play the maximum number of five games on prime-time.

The Pittsburgh Steelers are coming off back-to-back 8-8 seasons and they didn’t qualify for the playoffs either time, which marked the first multi-year absence from the postseason for the first time since a year-season span from 1998-2000.

Those facts are undeniable, and upon the release of the league’s 2014 schedule, so is this: the three television networks that broadcast NFL football in prime-time still love the Steelers.

The maximum number of prime-time games that can be included on a team’s initial schedule is five, and the Steelers are maxed out in that department for 2014. The NFL does reserve the right to flex a team into a sixth prime-time appearance, but as of today the Steelers are as popular with the networks as any other franchise in the league when it comes to drawing eyeballs to the television industry’s most important slot.

The Thursday night game in Baltimore will be the first-ever CBS telecast of a package that’s being introduced for the 2014 season.

You can check out the full 2014 schedule, including the pre-season games, at the bottom of this page!