From the Findlay (OH) Courier via Officer Chad McMonigal, Findlay Police Department, and The Giving Back Fund: 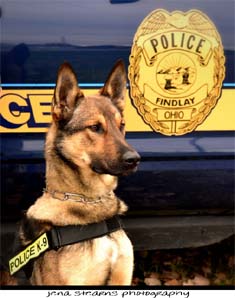 The Findlay Police Department’s latest tool for sniffing out drugs, Shadow, doubles as another way for officers to connect with city residents.

Paid for entirely by a grant from the Ben Roethlisberger Foundation, Shadow recently joined the department as its drug-detecting canine. Shadow and his handler, Officer Chad McMonigal, inspect vehicles for illegal drugs, and meet citizens in an effort to prevent crime.

Shadow, a 15-month-old male service dog from the country of Holland, replaces Spike, who retired from the department on Sept. 1. McMonigal and Shadow trained together in Fremont for six weeks in September and October.

“Every dog there had different drives, characteristic traits,” McMonigal said.

McMonigal described Shadow as the “perfect tool” for both drug work and bridging the divide with those who feel reluctant to meet police.

“They see he’s so welcoming and it changes their attitude right away,” he said.


You can read more about Shadow here.

You can learn more about The Ben Roethlisberger Foundation here.


*Thank you to Officer McMonigal!