“He’s the difference-maker. He’s a two-time Super Bowl champion, so you definitely want that guy under center. It’s bittersweet. Glad to have the win, but we’d rather have those guys (Roethlisberger, receiver Antonio Brown and safety Troy Polamalu) playing. It just does good for the rivalry, for football, to have both teams have key components.” — Baltimore linebacker Terrell Suggs on the rivalry and their win last night. 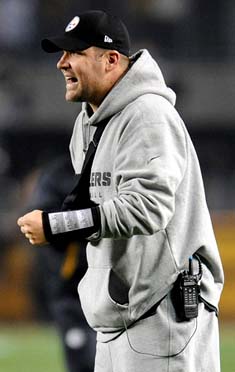 With Roethlisberger shouting encouragement from the sideline, his injured right arm in a black sling, Leftwich ran for a 31-yard touchdown to cap the game’s first series, but his offense did little after that. He was intercepted once and the Steelers failed to get into the end zone after reaching Baltimore’s four in the third quarter.

“The difference is obviously that we didn’t find a significant play, particularly in the waning moments and in any of the three phases to be the difference,” Steelers’ head coach Mike Tomlin said.

The Ravens’ 13-10 victory bounced them into a two-game lead over their bitter rivals in the AFC North Division. Baltimore is 8-2, and the Steelers 6-4. The teams meet again in two weeks in Baltimore.

“It was a typical Steelers-Ravens game, hard-hitting, low-scoring, down to the wire,”said Jonathan Dwyer, who led the Steelers with 55 yards rushing as part of a three-headed halfback rotation…

The Steelers defense had a fine night, and that was the case in how they dealt with all facets of the Ravens offense. Ray Rice averaged 2 yards a carry; Torrey Smith had one catch for 7 yards; the Baltimore offense finished with 200 net yards; and in 11 possessions that were not kneel-downs, the Ravens punted eight times and missed a field goal. Clearly, the defense deserved a better fate…

“He played like a tiger.”— Left tackle Max Starks on the toughness of Byron Leftwich.

– Ron Cook, Pittsburgh Post-Gazette, on the valiant performance of the Steelers defense.

– Dejan Kovacevic, Pittsburgh Tribune-Review, on the toughness of Byron Leftwich.