Two new police dogs on the job in South Euclid, Ohio. One of those dogs was purchased with a grant from the Ben Roethlisberger Foundation! 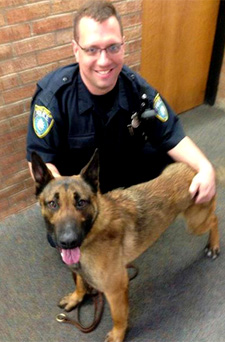 With the addition of the dogs, SEPD Chief Kevin Nietert’s wish to have a dog on all three shifts is being fulfilled. One of the new dogs replaces the recently retired Rex. Another dog, 6-year-old, Recon remains on the force.

Kolbe is 13 months old, while Oktane is still a puppy at 11 months.

Kolbe was obtained with grant money from Pittsburgh Steelers quarterback Ben Roethlisberger, whose foundation purchases dogs for police departments in cities (and surrounding suburbs) which the Steelers visit during their season.


“This Thanksgiving, the men and women of the South Euclid Police Department have something very special to be thankful for. The grant from The Ben Roethlisberger Foundation will allow the K-9 unit to continue the important work we do.” – South Euclid Police K-9 Officer Michael Fink (posing with Kolbe at left) in November, 2012 when the grant was announced.

Nietert said both dogs — Kolbe is a Belgian Malinois, and Oktane, a German shepherd — were born in Czechoslovakia. “The dogs act as a force multiplier and are great for public relations,” Nietert said.