“Officer Fritsch is heading to Indiana with Santo this weekend for the start of K9 training! We are very excited to have another K9 to help us in our efforts to combat the influx of drugs in our community. In addition, we are extremely grateful for the grant opportunity through the Ben Roethlisberger Foundation. Budgets are so tight and the funding from BRF aids in accomplishing our mission.” — Captain Ben Bliven, Wausau Police Department, to us on March 28, 2014.

Ben’s foundation had a busy 2013-2014 season, distributing more than $135,000 in grants to K-9 units around the country. We are so pleased to share with you these updates from some of the agencies that received those grants:


From WSAU News in Wisconsin: 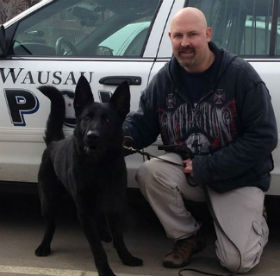 Wausau Police officers have a new K-9 helper. Captain Ben Bliven says the new four-legged officer was brought to Wausau last weekend for his initial orientation. “Santo is our newest addition to the police department. He is a two-and-a-half year old German Shepherd, and his partner will be Shawn Fritsch, who is our newest canine handler.”

Santo and officer Shawn Fritsch will be leaving this weekend for Denver, Indiana to train for six weeks before going on patrol together.

It costs police departments anywhere from ten to thirteen thousand dollars to acquire new K-9’s. Bliven says Santo was purchased with a grant they received from a professional football player’s foundation that focuses on police dogs. “We were able to purchase Santo with the funding that we received from the Ben Roethlisberger Foundation grant that we received back in December.”


Wausau PD
@WausauPD has a new K9, Santo. Thanks @_BigBen7 for the grant for our newest drug-fighting force! #Steely_Santo

“Welcome SANTO to our department. Ofc Shawn Fritsch picked him up from Denver, Indiana, Von Liche Kennels on Sunday. Thanks to the Ben Roethlisberger Foundation for the funding to help improve our community.” — Posted by the Wausau (MI) Police Department on their official Facebook page, March 26, 2014.

My name is Police a Officer John G. Reuter and I am with the Fort Lee Police Department in Fort Lee NJ. My department received a grant from your foundation during the last NFL season to purchase a new K9 for our department. I was chosen to be assigned to the K-9 unit and be the dog’s handler. Let me start off by saying that I am extremely grateful and can not describe in words how thankful I am that our department was chosen for this grant.

K9 “Ajax” and I will be completing our first training school (Narcotics Scent Detection) in approximately two weeks. Then in September we will be starting “Patrol School” together.

K9 has always been a goal and a dream of mine and because of your foundation I was able to achieve it.

Once again, thank you very much for your generosity and for choosing our department.


Thank you Officer Reuter and the Fort Lee Police Deparment!


From Margaret Harding, at the Pittsburgh Tribune-Review: 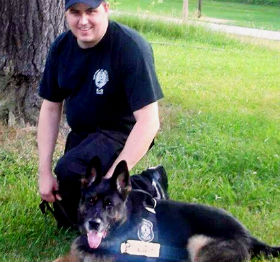 “It’s been a long three months, but I’m better,” Officer Phil Lerza said. “I just want to thank everybody for the support.”

Lerza said he has begun training with Beny, a 13-month-old mix between a German shepherd and Belgian Malinois that the Ben Roethlisberger Foundation bought for him.

“We just started, but it looks good so far,” Lerza said.

Lerza attended a check presentation ceremony Tuesday at the Greater Pittsburgh Police Federal Credit Union in Elliott. The Fraternal Order of Police Fort Pitt Lodge No. 1 and the credit union received more than $23,000 in donations that came in after Rocco, an 8-year-old German shepherd, died of injuries from a stabbing attack in January.

The money will go into a Pittsburgh Foundation fund to benefit the city police K9 unit.


Celina Pompeani @CelinaPompeani
The martins ferry PD got a $9500 grant from @_BigBen7 foundation to support their K-9 unit and adorable Ecko!!

From Kayla Van Dyne, at the Times Leader: 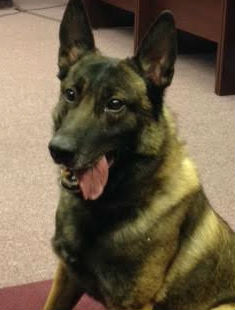 MARTINS FERRY – The city’s police department recently received three grants that will go toward the betterment of the department and the service it provides to the city.

A check was presented to Martins Ferry Police Chief John McFarland at a press conference that was held Wednesday.

The largest grant was $9,500 from the Ben Roethlisberger Foundation through the Giving Back Fund. The money from this grant will go toward general expenses and veterinarian care of Martins Ferry K-9, Ecko.

“I want to extend a huge thank you to the Jefferson County Humane Society and the Ben Roethlisberger Foundation for this grant. This money will go toward insurance for Ecko, which is an important thing in case something would happen to him,” said K-9 unit handler Chad Kuhn. “This was a blessing, and I did not expect it. We were doing OK without it, but now we are going to do even better.”

Ecko is a 5-year-old Belgian Malinois and is a dual purpose K-9, which means he is trained in narcotics, suspect apprehension and tracking.

And before putting the brakes on this post, we leave you with this: 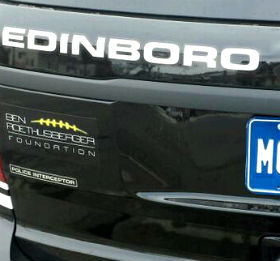 On February 13, 2014, the Ben Roethlisberger Foundation awarded a grant to the Edinboro Borough (PA) Police Department…

and on March 27, 2014, a local Edinboro business spotted the foundation’s logo on a bumper sticker proudly displayed on an Edinboro police cruiser.

Folks at the Edinboro Hotel, a turn of the century landmark, took the time to tweet a great photo as well as their thanks to Ben:


@EdinboroHotel
@_BigBen7 Edinboro Police new K9 vehicle looking good w/ your logo on it. The community thanks you for your grant!

*Thank you so much to Officer Fritsch, Captain Bliven, Officer Lerza, Officer Kuhn, Chief of Police McFarland, Celina Pompeani, and the Edinboro Hotel!