Ben joined The Cook and Poni Show today for his weekly appearance on the #1 Cochran Ben Roethlisberger Show.


The recap from CBS Pittsburgh this evening: 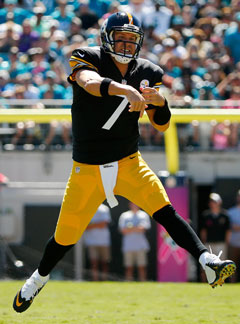 Ben opened the show talking about how he almost came to Pittsburgh earlier in his career after he considered playing at Pitt.

He also talked about what it’s like to return to his native state of Ohio to play the Browns this weekend, but the big subject was about the decision to try and get Antonio Brown his record over taking a knee and running out the clock.

Roethlisberger told Andrew Fillipponi that it was important to Antonio Brown to extended his streak of 5 receptions and 50 yards so that is why he consulted Coach Tomlin about calling a final play.

Roethlisberger said it’s not a problem for anyone in that Steelers locker room but rather to the media and certain fans.

The Steelers did win the game 17-9 over the winless Jacksonville Jaguars on Sunday but it took an interception returned for a touchdown for the Steelers to secure the victory. The Steelers offense was only able to put together 10 points against a defense that was on pace to give up the most points in the history of the NFL.

“It was nearly as bad as it felt afterwards,” Roethlisberger said. “We need to be better. Looking back on it, my personal opinion on it is there were 2 or 3 maybe 4 plays I would have liked to have had back, that maybe I could have done something better.”

Roethlisberger said that the Steelers game plan was to throw because Jacksonville showed a tough front that would be hard to run against. They thought they could have success against the secondary.

“We knew going in we were going to try and throw the ball against them and that involved red zone and out in the field. We did a pretty good job.” Roethlisberger said. “Some of it’s me calling plays, some of it’s Coach Haley calling plays. I don’t think a finger can be pointed at anybody in particular other than just executing better.”

Roethlisberger may not be pointing fingers at anyone but he is not afraid to be the one to take the blame saying it’s up to him to put the team in better positions to make plays and score in the red zone.

“I just need to work on getting better so we can get us I the best play but the guys do a great job of executing what I call even if it’s not the best play,” Roethlisberger said. “I think our no huddle has been good. We’ve executed well. We just need to keep doing it.”

They will get a chance to test out the offense on the road this Sunday when they face their bitter rivals in Cleveland. Roethlisberger who grew up in Ohio always likes returning to play the Browns.

“Going back to Ohio I always have a lot of fans if you will.” Roethlisberger said. “They (Browns) didn’t draft me but that was a long time ago. It’s not like I hold any animosity towards them, but it’s definitely special to go back to Cleveland and play.”


You can listen to the full show here (bottom of page), which is worth checking out just for the David DeCastro/Andrew Luck story!

You can hear his show LIVE every Tuesday at 11:00 a.m. during the football season on The Cook and Poni Show on Sportsradio 93.7 The Fan (KDKA-FM).