Ben on Antonio Brown’s record: ‘a guy like that deserves it’

Home/News/Ben on Antonio Brown’s record: ‘a guy like that deserves it’
Previous Next

Ben on Antonio Brown’s record: ‘a guy like that deserves it’

From Scott Brown today, at ESPN.com: 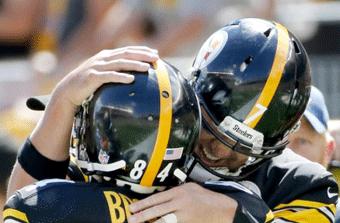 Quarterback Ben Roethlisberger’s appreciation of wide receiver Antonio Brown showed at the end of the Pittsburgh Steelers’ 17-9 win Sunday against the Jacksonville Jaguars.

Needing to take three knees to secure the Steelers’ third win of the season, Roethlisberger successfully lobbied coach Mike Tomlin to throw one more pass so Brown could extend an NFL record.

With two minutes left in the game and Jacksonville out of timeouts, Roethlisberger threw a short pass that Brown turned into a 16-yard catch and run. The Steelers ran out the clock from there.

Roethlisberger made the unorthodox request so Brown could catch a fifth pass and make it 21 consecutive games in which he has had at least five receptions and 50 receiving yards.

“I’m not always a fan of doing things like that, because I know that bad things can happen, but a guy like that deserves it,” Roethlisberger said. “He deserves to get the ball to keep the record going because of the work and dedication he brings to this team, to the game and the organization. I’m just glad that the coaches were OK with it and he got it.”

Ben has posted a passer rating of 100.0+ in four of the first five games of a season for the first time in his career. (Source: Ryan Scarpino, Steelers PR)