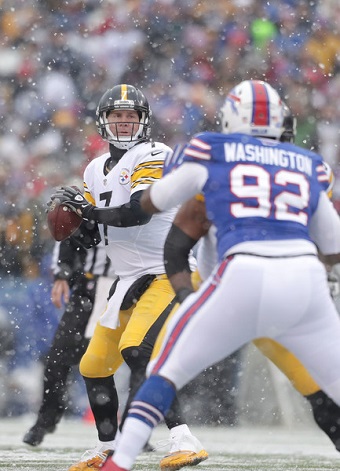 Ben Roethlisberger is coming off his worst game of the season in a 27-20 win over the Buffalo Bills, a victory that saw Le’Veon Bell carry the team at times.

On “The #1 Cochran Ben Roethlisberger Show”, the Steelers’ quarterback talked about Bell’s performance and why the game plan shifted from spreading the Bills out and throwing the ball to letting Le’Veon carry it 38 times.

“It’s that time of year where whatever it takes to win, and I think he will tell you the same thing,” Ben said. “If he’s got to run into the ground for us to win a Super Bowl, I think he’ll take that, and we all will.”

Bell ran for 236 yards on those 38 carries while adding 4 catches for 62 yards. His 298 total yards single-handedly out gained the entire Bills offense.

Looking at his own performance though, Ben gave a very direct and honest critique of himself as he threw three interceptions and no touchdowns.

“I take full accountability that I need to play better. I know that you and other people are talking a lot about me needing to play better on the road, and I fully agree,” he said.

Regardless of how the Steelers got the victory, it was a monumental one for head coach Mike Tomlin as he recorded his 100th career victory. He joins the exclusive company of George Allen, Vince Lombardi and John Madden as the only four head coaches in league history with ten-plus seasons and zero losing seasons.

Ben talked about Tomlin’s accomplishment and presenting him with the game ball.

“It just seemed like a unique milestone, a milestone that needed to be recognized…so I just wanted to recognize a coach that has won 100 games in this league when it’s not easy to win,” he said.

Ben even joked with Tomlin about whether or not he’s allowed to hand out game balls.

The win marked a special milestone to Ben as well which he told us about.

“We’ll take an ugly win, we’ll take a pretty win, as long as we win. That win meant a lot to me personally because it was win number eight, which means 13 years now and I still haven’t had a losing record, which is something I take pride in, never having a losing record with the Pittsburgh Steelers,” he said. 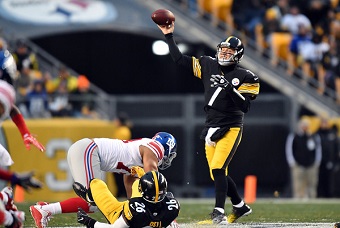 Things wrapped up this week with Ben being asked about the accusations made against the team by the New York Giants that they were deflating balls.

“Just unbelievable, people will do anything I guess…it’s a total non-story, non-issue, it’s kind of laughable,” Ben said.

Ben even shared that he has no interest in checking the game balls or doing anything to them.


Click here to listen to more from Ben as he talked about his relationship with former Bills quarterback Jim Kelly, Todd Haley being mentioned for some potential head coaching vacancies and what sort of game he’s expecting from Vontaze Burfict and the Cincinnati Bengals this week.