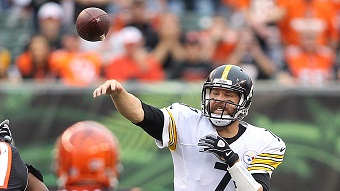 The Steelers-Bengals rivalry has become a heated rivalry over the last few years, with physical, aggressive play being the norm when the two AFC North teams meet up.

Ben Roethlisberger doesn’t expect anything different this Sunday when they kick off at Paul Brown Stadium.

“Typical one down there. Crazy. Riled up,” said Roethlisberger. “It’s AFC North. It’s us coming to town. Maybe not quite as crazy as it would have been if it was that initial 8:30, but I still expect the fans to come out and it to be a typical Steelers-Bengals game.

“It’s that feel every time you go there. Throw records out the window. That time of year, the time of the game, all of those things. It’s going to be a great atmosphere.”

If recent history is an indication, it will definitely be a physical game. Players like Le’Veon Bell and Antonio Brown have been injured in past games against the Bengals, adding fuel to the fire. Bengals’ linebacker Vontaze Burfict was suspended for the first three games of this season for repeated violations of the player safety rule, which culminated with a hit to Brown that left him with a concussion in the playoffs last season. The intensity is expected to continue, but Roethlisberger expects the game to be played clean.

“I hope it’s not dirty,” said Roethlisberger. “We expect a physical game. That’s what we want it to be. We expect them to be the same way. We are not going to be a dirty team. We are going to go out and play football and play hard and physical, not retaliate. Just play this game the way it’s supposed to be played. If there are a lot of nasty things going on, I guess we will know why.

And to do that, the offense will have to deal with a Bengals’ defense that is physical, hard-hitting, and doesn’t have a lot of give, starting with their front seven, which includes Geno Atkins who was named AFC Defensive Player of the Week this week. They have a strong pass rush, and it won’t allow Roethlisberger a lot of time to sit back in the pocket.

“That is where it starts with them, their pass rush,” said Roethlisberger. “Whether it’s their ends getting up field, they are real long. It’s a real good front seven. They make it hard to have time to sit back in the pocket to try and complete those balls.

“You have to keep an eye on all of them. That’s how good they are on defense.” 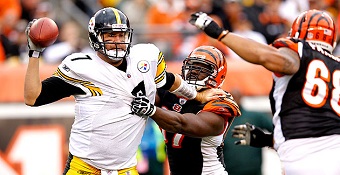 “Not really [different than when he got hired]. I mean, that’s kind of what makes him who he is. Everyone grows and changes a little bit, but he’s been the guy who throws the, “It is what it is” and “Iron sharpens iron,” and all of those words since Day One. You listen to the press conference he does, I think he does it at Noon, I’m sure you guys feel the exact same way. So I think that’s what makes him who he is. He really doesn’t change much.”


On having that consistency:

“It’s just that. It’s consistency. It’s stability. You know what you’re going to get.”


On if he’s used “Tomlinisms”:

“You can’t help it sometimes. You don’t think about it. You just say it. Then, you’re like, “Oh, man. That sounds like Coach Tomlin.” So it is what it is.”


On if he could see a running back winning MVP:

“I think they [Ezekiel Elliott and Le’Veon Bell] at least deserve to be in the conversation. At least my guy, I know it. I know, obviously, what Ezekiel has done. But I put my vote for 26 any day.”

“Very good. A veteran guy. He’s wily. He takes his chances, he gambles at times. But he also understands concepts and reads, does tape study and understands my alignments, what could come and what could happen. So a very good corner.”


On how Vontaze Burfict changed their defense:


On running the ball well:

“Well, that’s a positive. Being able to perform when your quarterback is having a bad day at the office, other guys were able to step up and make things happen. That’s what the team is about. That’s why this is the ultimate team sport. Guys step up for each other. At this time of year, whether it’s elements, the weather, the conditions, injuries, whatever it might be, you’ve got to be able to have other facets of the offense step up and rise up. Like you said, bringing Hub [Chris Hubbard] in, bringing [Roosevelt] Nix in, doing different kinds of things in December and January-type football. You’ve got to be able to make adjustments on the fly if you want to win.” 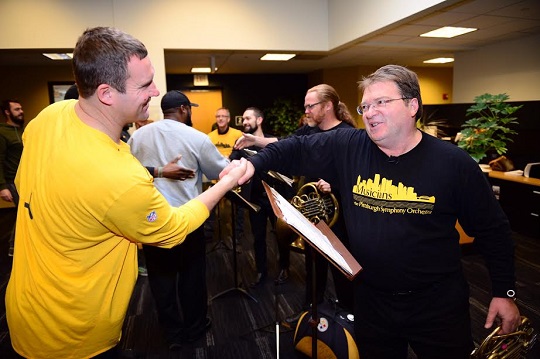 Ben thanks members of the Pittsburgh Symphony Orchestra after their beautiful performance of holiday favorites for the team!