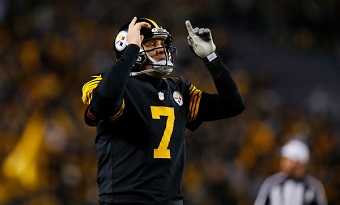 The Steelers are coming off a 31-27 victory of the rival Baltimore Ravens that clinched the AFC North division on Christmas Day.

Roethlisberger led the team down the field on the final drive to win, while overcoming his mistakes from earlier in the game. He used some interesting motivation to go win the game.

Roethlisberger led the team down the field on the final drive to win, while overcoming his mistakes from earlier in the game. He used some interesting motivation to go win the game.

“I heard a handful of kids behind me just kind of saying, ‘Let’s go Ben, you can do it, we believe in you, you’re our favorite.’ Something like that, you know and you hear a lot of the negative, that just kind of washed all the negative away,” said Roethlisberger. “As I was standing on the sideline, I remember as I was standing there praying and doing some thinking on the sideline, I remember thinking to myself and praying, ‘I want to go do it for those kids.’”

Roethlisberger has not heard if he will play Sunday against the Browns or not. He did not say he didn’t want to play Sunday, but says he will appreciate the rest if he gets it.

“You know, as we all are this time of year, even though the line has played great and they’ve really kept me upright, if you can get a little bit of rest to head into a playoff time I would use the rest. If coach [head coach Mike Tomlin] wanted me to play I would play, too, but if I could rest my old bones, the knees and the shoulders and stuff I would take that rest as well,” he said.

When asked if the Steelers would have been able to get another play off before time expired on the game clock had Brown not made it into the end zone he simply said:

“You can ‘what if?’ every single play of a football game can’t ya? I mean, what if he would have caught it, if he [another player] would have caught it, what if you don’t throw the interception…I mean, you can ‘what if?’ anything,” said Roethlisberger. “It’s funny, watching SportsCenter or hearing you guys or other people, the talking heads talk about ‘well what if? They wouldn’t have been able to do this, they wouldn’t have’…it really doesn’t matter. That’s what should be talked about it, it doesn’t matter.”

Roethlisberger then took the time to describe the last play and what the Steelers would have done if Brown was, in fact, stopped short of the goal line. 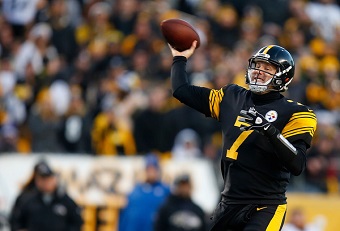 “Probably wasn’t the best play call, but you know what, the thought is if it’s not there you throw it away, if there is something there, you make a play,” said Roethlisberger. “Well, you throw the ball to AB because he’s open right away and everyone was talking about, ‘Well, you wouldn’t have had enough time with nine seconds to run up, spike it and get the field goal team.’ We wouldn’t have done that anyway. We would have ran up and ran a quarterback sneak and that takes less time.”

“With as close as everybody was, like the [offensive] line’s all right there, no one’s on the ground, you know I’m saying no linemen are on the ground, it’s not like it’s a run play or something. We’re coming down, we could have lined up and ran a quarterback sneak and I like our chances of getting in, but like I said, it doesn’t matter.”

Roethlisberger says the team is generally healthy right now heading into the playoffs, but stressed the importance of playing through some of the minor injuries the players may have at this point in the season.

“We just have to make sure that everybody understands that [playing through minor injuries] too on this team, young guys that haven’t been here before or guys that are relatively new even if they were here last year. It doesn’t matter if you’re a little dinged up, you’ve got to fight through and you’ve got to play because you never know if you’ll get another opportunity to get to the playoffs, to get a chance to do what we’re getting to do. So, even if guys are dinged up, we’re going to need everybody out there and everybody’s best effort because it could be your last time on the football field,” he said.

Last week, Steelers Hall of Fame quarterback Terry Bradshaw, now broadcaster for Fox Sports, made comments on the air about Steelers head coach Mike Tomlin and how he thought Tomlin was more of a “cheerleader” than a great coach. Roethlisberger found Bradshaw’s comments comical when he first heard them.

“I laughed. I mean, I’ve been doing this long enough that I’ve heard people say things about me, about coaches, about players and you just have to move on,” said Roethlisberger. “It was really tough when I got asked about it because I do respect Terry, obviously for what he’s done on the football field. Four Super Bowls, I’ve always said that he is one of the best because of that, but sometimes you just have some of the things that come out of his mouth you don’t always have to agree with.”