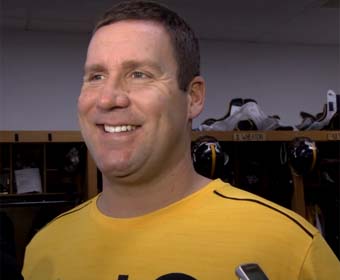 Coach Mike Tomlin said during his weekly news conference that he would like to give some of his starters a rest this week against the Browns to make sure they go into the postseason healthy.

Among those on the short list is quarterback Ben Roethlisberger.

“It’s about getting older,” said Roethlisberger. “This time of year everybody’s a little banged up and hurting and things. If coach says take the day off, I am not going to argue.”

The last few years the Steelers have missed some of their biggest weapons on offense in the postseason because of injuries, including Le’Veon Bell and Antonio Brown. So while resting those guys might worry some about them getting out of rhythm, Roethlisberger thinks it’s the right move.

“Staying mentally strong is huge this time of year,” said Roethlisberger. “Being mentally ready to go. It’s been a long season. Physically it can be better if you get healthy and rested up. We will still take our time and get stuff ready to go. We will have all next week to get ready for whoever we are playing.

“We hope we can get everybody out of this last game, especially the guys up front. That is most important. If they are healthy and playing their best football, which I think they are doing, that makes everybody’s job easier and all of us play better.”

If Roethlisberger doesn’t play, the offense will likely be in the hands of Landry Jones. Roethlisberger said he will help Jones prepare all week and likes the growth he has seen in him.

“Just his understanding of the offense, growth, play calling,” said Roethlisberger. “We can do no-huddle with him. Him being around here you see a lot of understanding of football, our offense, defense, and things like that.”

“He has continued to grow. Just little steps along the way. Not making the mistakes. Understanding when he is hot, understanding how to run routes. Blocking. I think he has done a great job in the blocking game as well. The little things have added up to his growth and I think from where he was from the beginning of the year to now, is a huge asset to us. It might not show in the stats and stuff, but we see it when we are watching the film.”