Okay, so it’s only Monday morning, but with the short week (another game on Thursday), Ben’s show was pushed up a day: 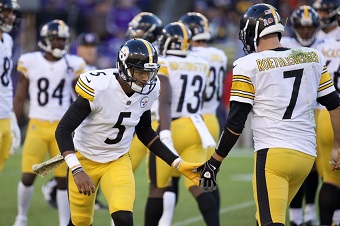 Steelers Quarterback Ben Roethlisberger says he is thankful the hit he took Sunday in Baltimore wasn’t more serious, but that he is definitely feeling it Monday.

During the #1 Cochran Ben Roethlisberger Show Monday Morning, Ben talked about the hit he took that knocked the wind out of him in the fourth quarter Sunday that gave Steelers quite the scare.

During his longest run of the day, Roethlisberger took a hard hit from Ravens outside linebacker Za’Darius Smith.

“I didn’t know he was right behind me and I was heading to that sideline, I saw that first down marker and I was trying to get there. Boy, when you don’t see it coming, it hurts a lot worse,” said Roethlisberger.

When asked about what went through his head as he was lying on the field Roethlisberger said,

“You feel a very big person coming down on top of you and when you hit the ground, instantly you just kind of feel pain, you feel shortness of breath, you feel a little bit of everything, I’ll be honest, but pain mostly. Then as I’m lying there…I had to stay in the fetal position because I couldn’t even straighten my legs because I couldn’t breathe. You just hear the doctors and you hear everybody ‘What’s going on? What’s going on?’ And you want to answer them but you really can’t.”

He then described going through a “check list” of making sure he was okay.

“Okay, shoulder…a little sore, but I think it’s okay. Collarbone…feels okay, [and] then goes the whole check list thing. Once I got on the sideline more, your wind starts coming back to you.”

Roethlisberger added that he was “Lucky and blessed that I did not get more than the wind knocked me. Everything from my collar bone to mid-section is in extreme pain.”

While he was out for a play getting his wind back, backup quarterback Josh Dobbs came in and hit Juju Smith-Schuster for a 22 yard pass to get a first down. It was Dobbs first NFL pass.

“I thought that was awesome. I had no idea what the play was, and I looked and saw him drop back to pass and it peaked my interest. I thought for sure that we were going to run the ball. I see him drop back to pass and I kind of peaked to the outside to look at our receiver running down the field and next thing you know, I see Josh stepping up and delivering a perfect pass to Juju. I was so proud and happy for Josh. Someone asked if I was surprised and I said no because he prepares everyday like a professional like he’s going to go out there and make that play when he gets the opportunity, and he did it.”

“Well this is normal I think. We’ve been saying that he’s a special player. I think it’s time that we say maybe some of the success goes to the line too. When you talk about how great Le’Veon is and what James is doing, and I’m sure James would be the first one and Le’Veon too, will tell you that they’re only as good as the line is, and they’re playing really, really good football right now.”

Roethlisberger added how proud of Conner and his play.

“James just keeps doing his job and his job is to run the ball hard, protect and catch the ball. He’s doing all those things at a really high level right now. We’re all really proud of the way he’s playing.”

Has he heard anything about Le’Veon Bell’s status for this week?

All he said was “Nothing.”

When asked about Mike Tomlin’s quote on Bell that they “Need volunteers, not hostages,” Ben laughed and said “That’s the first time I heard that. That’s pretty funny. I wonder where he got that one from.”