Wednesday’s…er…Tuesday’s Chat with the Media

Wednesday’s…er…Tuesday’s Chat with the Media

“I don’t need to give him advice. He’s Superman.” — Ben’s response when asked (?) what advice he would give Cam Newton in prolonging his career. 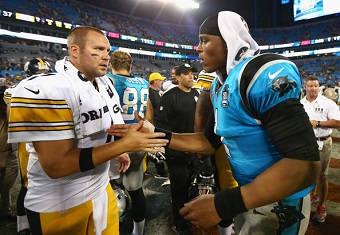 The Steelers went back to work on Tuesday, a short week to prepare for Thursday night’s game against the Carolina Panthers at Heinz Field.

And to add to the difficulty of preparing on a short week, the team is coming off a physical game against the Baltimore Ravens on Sunday.

“That is probably the toughest part, is the physicality of the game before. Playing Baltimore,” said Ben Roethlisberger. “Everyone knows that is going to be one of the most physical games of the year. We have a couple of days to get ready for another physical team.”

And the best way to prepare, allow your body to recover as much as possible.

“Rest,” said Roethlisberger. “Just try to do what you can to get as healthy as you can.”

Another issue the short week presents is game-planning. Normally there are three full days and the Saturday walk-through to go over everything. This week, it’s two days.

“We’ll be able to throw some new stuff, some new things in there, but not like a typical work week or game plan week where you have a lot of things,” said Roethlisberger. “We’ll have to rely on the no-huddle and some things we have done over the weeks and years.”

Roethlisberger loves to run the no-huddle, something the offense has done with a lot of success, including last week against the Ravens. And it can be the perfect solution for this week because it’s something they have a comfort level with.